What started off as an attempt to get caught up with a favorite television series from my childhood turned into a month of catching up with all the British imports provided by PBS.

I have been an avid Doctor Who

fan since I was a kid.  The first Doctor I remember was Tom Baker

, the 4th doctor in the series.  You never forget your first doctor.  I know I saw the previous and the latter, but that's who I remember the most from my childhood.  I think it was the iconic quirkiness and the giant scarf that made him so memorable.  So, having seen that and being considered an outcast and a weirdo for it when I was a child,* it was rather interesting to me that there was all of a sudden a resurgence of Doctor Who.  I mean, sure, I had a Tom Baker Doctor Who burlesque routine complete with Tardis and scarf, but all of a sudden people out side of cons were recognizing that it was a Tardis and not just a Police Box.**  I caught a few of these newer episodes, but nothing regularly as I didn't really have time.  Since I just graduated in Dec and I wasn't producing, stage managing, etc... anything in January it seemed like it was time.  It was every bit as hokey and wonderful as I remember it being when I was a kid.  I started with the Doctor Who

1st season^ and watched all the way through the first half of the 7th season^^ because that was as far as it would let me go with my Amazon Prime membership.

So I am stranded with out being able to go further in the series, now what am I going to do?  Well there was this character, Captain Jack Harkness, that was fun and beloved enough that he got his own series, Torchwood

...so I watched that.  All of that.  Seriously, I think it took me like 4 days to watch all four seasons. The season in America got weird and frankly, it was funny to hear him be "American" and continually mispronounce words.#  I am sure they feel that way when they see American's do bad British accents so I guess it's all fair.  But that was only four seasons, and not even full seasons at that, so I still had time to kill and needed SOMETHING to be background noise while I worked on my computer all the time for Southern Fried Burlesque Fest...what should be next?

Next was Sherlock.  Keep in mind I have read all the original Sherlock Holmes

novels by Sir Arthur Conan Doyle so I am no stranger to the great detective.  The "seasons" (seriously? 3 episodes each) were based on the original stories which were well done.  It was fun and I enjoyed Benedict Cumberbatch in the role.  I used to watch the Basil Rathbone

versions when I was younger.##  I have been in love with these stories for a long time and I think that it's something that will always fascinating to people because of the amazingness of his mind.  We all wish that we were that observant.  If you were smart enough you could actually work to be as great as he was.  You didn't need lots of money, or super powers, you just had to be smart and dedicated.  And the fact that Sherlock has flaws with addition and being a high functioning sociopath it makes him more likable because he's not perfect.  Television shows like Psych

, etc... exist because of an on going fascination with Doyle's work.  Even modern day crime shows like CSI

, that are based on examining evidence owe their existence to him.  So now I'm watching the new episodes as they come out and I remember why I tend to wait until a show is cancelled to watch because I am terribly impatient. 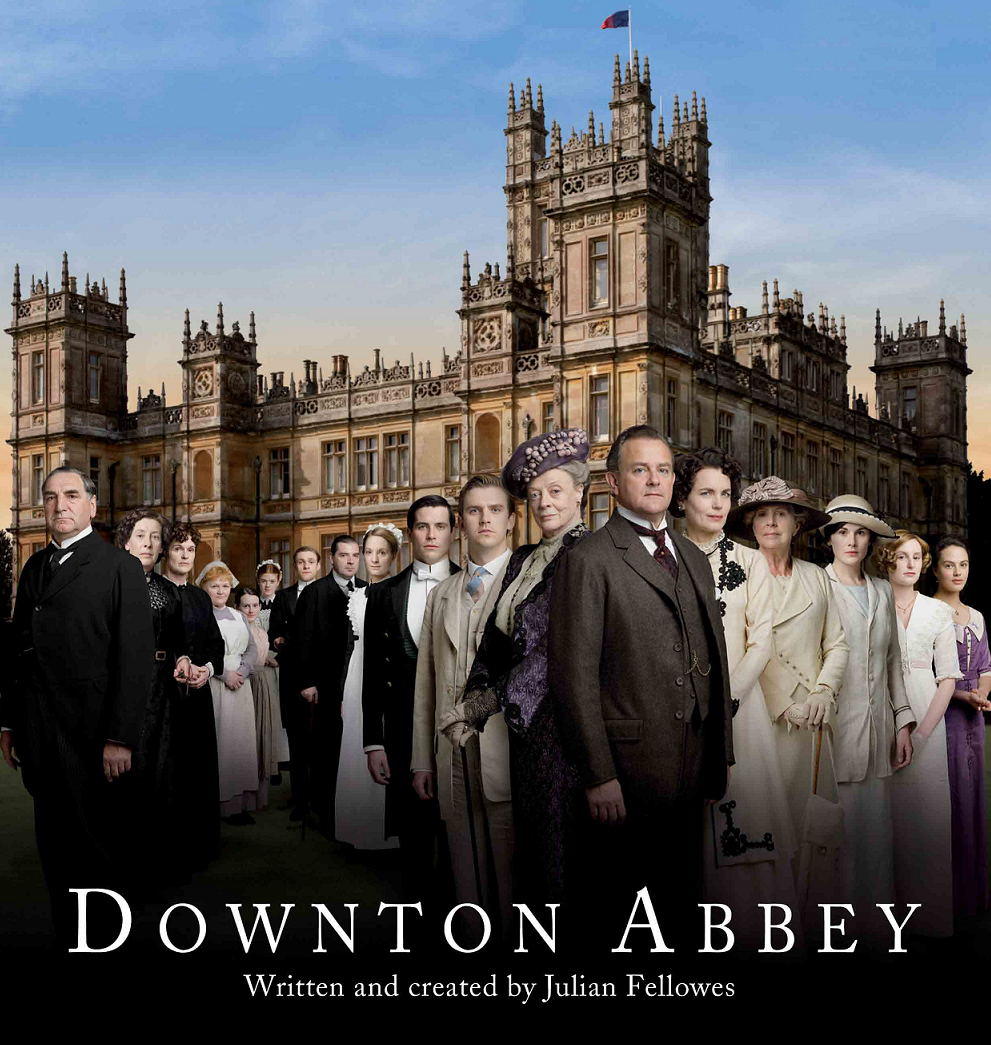 to the list of must watch this month of British theme.  It's kinda awesome.  I was reluctant to get into it because everyone was ranting and raving about it so much it rather put me off.  Last time someone ranted and raved about something I was sorely disappointed because there was no way it could live up after being built up that much.  However, I do love a period piece and that's exactly what this is.  It very much reminded me of Gosford Park

, maybe because Maggie Smith was in that as well.~  We don't have nobility in the USA so I think that's why so many of us are a little fascinated by it.  It's part of our history and yet means nothing to us here.  It's a study of the class system and you end up feeling pretty bad and attached to everyone involved no matter their station.  I am now keeping up with it as the new episodes come on as well.  I went as far as I could on Amazon Prime and then watched the episodes on the PBS website to get caught up before this past Sunday.

So here I am.  I can't watch the second half of the Doctor Who 7th Season.  I am done with Torchwood.  I am waiting on the new episodes of Downton Abbey and Sherlock.  What am I supposed to watch now?  I threw on The Tudors

for back ground noise while I decide, but I've seen them all before.  I'm taking recommendations.

*Ya know, back before being a geek was cool, I remember going to cons as a kid in the 80s, they were totally different.
**Yes, when I was in London I totally looked for a Police Box and was sorely disappointed.  DON'T JUDGE ME!
^Seriously, the 1st season of a show that had it's 50th anniversary in 2013?  It acknowledges the original series, it's not a reset, it's a continuation...ugh...so dumb that we have to say new and classic as a result unless you just go by Doctors which really makes the most sense anyway.
^^Why did they keep all the specials separate, WHY?  it was so frustrating that I was having to hunt them down rather than they be in the frickin' seasons with the rest of the episodes.
#By mispronounce I mean with English pronunciations, because if he's supposed to be American it was wrong.
##I did mention this was a resurgence of an old forgotten love affair with PBS, right?
~I, in fact looked it up and apparently Downton Abbey was originally going to be a spinoff of Gosford Park and they decided to set it at an earlier time period...so I guess that's why it reminded me of it.
Posted by Unknown at 10:00 AM