It must have been hard growing up as the face of her father's international corporation.  I don't know if I could handle have my childhood photos being in commercials, on billboard, on buildings, etc...  So my hats off to Wendy Thomas for that alone.  She's pretty, she's not a size zero super model, but she's a very pretty woman who you look at and you think you want to be friends with because she looks like she's a nice person.  Besides, haven't you ever heard the saying never trust a skinny chef?  She's not morbidly obese or anything, she looks like a normal person.  Her dad looked like a normal person and connected with their consumers because of it.  For a brief shining period, Wendy Thomas had taken over doing the commercials, just like her dad had done before her.  Again, she seemed nice and the commercials were refreshing because they had real people in them.  They were classy.  She talked about how great the food was, the importance of tradition, the mission and work that Dave Thomas put forward in both his business and his charity work.  Wendy Thomas was a class act...then she came. 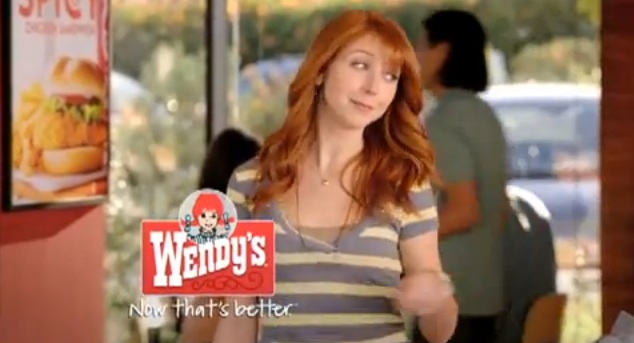 This was who they choose to replace Wendy Thomas with, a fictional version of Wendy.  I find her obnoxious, snooty and fairly insulting in her words and mannerisms.  I am not blaming the actress, this is how she was told to act, I blame the company.  Rather than talk about how great Wendy's is, she puts down the competition's food.  I hate when any company does that, your product should be so awesome you should never have to mention the competition.  YOUR PRODUCT SHOULD BE ABLE TO STAND ON ITS OWN.  On top of that she puts down anyone else in the commercial for not buying Wendy's.  Tells them they are being dumb with their money and their taste buds, she is actually food shaming them in the commercials for not agreeing with her.  In another commercial a guy is very excited about the new bun and she food shames him for being too excited.  What is she?  A redheaded Goldilocks that wants everyone to be just right, which means exactly like her.  She continually talks down to everyone else, treating them all like idiots and literally laughing at them, all of this makes her a terrible spokesperson.

This Wendy doesn't make me want to eat there, which is sad because I do love Wendy's.  It's always been my preferred fast-food burger joint because of the better quality of food and healthier selection.  Why don't they bring back the gentler, kinder, ACTUAL Wendy and get the advertising back to being about the product and classy like it was when Dave Thomas was still around rather than this horrible self righteous child who they're writing to be as obnoxious as possible.  I actually feel bad for the actress in that role and hope that she's not actually like that.  Everyone needs the money and the break, I get it, but sheesh!  I'm going to keep my fingers crossed for her.  Wendy's used to be better than this.  I don't think this was his vision considering the change in advertising since his death.  Classic is classy, this is crap.
Posted by Unknown at 10:00 AM