As many of you already know, I've been on team 7 Stages since I was hired to be the stage manager for Dracula: The Rock Opera almost a year ago.  Since then I have been honored to work with some amazing Atlanta artists and gotten to see some amazing shows.  This past weekend was the World Premiere of Angry Fags written by Topher Payne.  Yes, it deals with some very serious issues such as terrorism, equality and what it means to start a revolution.  It also deals with love, compassion, revenge, bath house fluffing, Steal Magnolia's and the importance of Julia Sugarbaker.  Everything you would expect and love from the Atlanta gay community.  They're here, they're queer and they're not going to take it anymore!

Topher Payne's script was amazingly well written.  The comedy was gold and the emotions were intense.  The inappropriate humor secured this play as being one of my new favorite black comedies.  There were multiple moments during the show that the words were so at odds with what was happening, these times made it seem darker and more real.  The nervous chuckle you accidentally let slip as the body count climbs and shivers stroll down your spine to keep you in the moment, it's that awkwardness that we have all felt when you have tried to not laugh during a moment of silence or cracked a joke at a funeral.  It constantly walked the line of good taste and occasionally blurred it in way that made you safely uncomfortable so you could really understand the message of the play, we're all people and we all deserve to be happy.

Jacob York gave an amazing performance as Bennett Riggs, the political savvy executive with a job as a political speech writer for the first lesbian state senator.  It is the lead, and hardest, role in the show with a full gambit of emotional trials and tribulations.  The most touching scene was in the hospital room, I don't want to give too much away, but the soliloquy he gave was heart felt, touching and chilling to the bone with it's love, sadness and sincerity. Bennett was often the straight man for Cooper Harlow, Bennett's flamboyant and fabulous roommate.  Cooper, played by Johnny Drago, was the stereotype gone commando.  Cooper was full of life, dreams and a rage that is beyond the average bitchy queen.  Cooper embodies the anger of the oppressed who only want to be looked at as equals and are stick of fighting to be treated like real people.  The entire cast was amazing; you hate who you're supposed to, love who you're supposed to and have mixed feelings at all the right moments.  The set was this amazing, modular alter to media that showed the importantance of political spin during what should be personal, intimate periods.  It was a series of amazing moments which kept me on the edge of my seat and I often found myself alternatively holding my breathe with concern and gasping for air between laughs.  The show runs through March 17th, I HIGHLY recommend everyone go to see Angry Fags before it disappears. 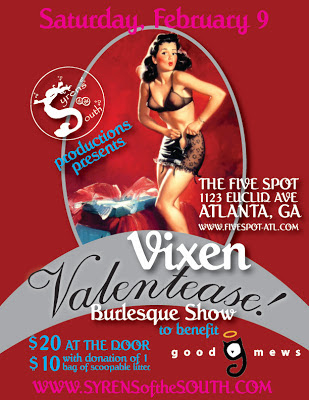 Posted by Unknown at 9:30 AM No comments: 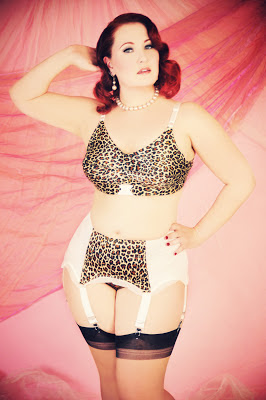 So back in January, Pinup Girl Cosmetics was offering a special Valentine's photo shoot for only $150.  The $150 included hair, make-up and eyelashes, styling, props, 2 edited photos plus champagne and tasty snacks which would normally have been over $200 and you wouldn't normally get snacks!  Did I mention there was cheese and shrimp?  SHRIMP!!!!  Sorry, I don't eat shrimp very often because of the cholesterol so I get excited!  So yes, with my Christmas money, I bought the package so I could have some new pin-up/burlesque publicity photos since my last ones were done in Jan of 2011 when Ursula Undress and I did the cover of Pin Curl Magazine.  I love that thanks to burlesque these are BUSINESS EXPENSES!!!  There are perks to everything!  It was as if the stars were aligning to help me out for the shoot, Secrets in Lace was having a 30% off all their clearance items which is wear the amazing out fit I am wearing in the photos came from.

So day of photoshoot, I get up super early (9am) so I can dye my hair to make sure that my color is even, bright, shiny and new!  I get done dying my hair JUST IN TIME to jump in the car and haul butt over to Studio Burlesque so I can teach my 11am Go-Go Shimmy Shimmy class, which is quickly becoming one of my favorite things to teach.  You should come see me for it sometime, it's silly!  Anyway, after class I fly back to the apartment to gather up my clothing choices for the shoot.  I had a few ideas in mind, but then realized that I couldn't remember what the back ground color was going to be and the last thing I wanted to do was clash or blend in, so I just packed everything.  Everything consisted of: 2 bullet bras, 3 garter belts, 2 demi cup bras, 3 pairs of stockings, 4 pairs of shoes, 3 pairs of opera length gloves, and 6 pairs of panties....all by Secrets in Lace because I have a love of pretty lingerie and honestly I was packing light, that is what happens when you are unsure of what you're walking into.

After the packing it was time for the nail salon!  I know a lot of people have mixed feelings about acrylic nails, myself included, but I am going to explain why they're important.  My world, 90% of the time, consists of school and work.  Neither of those things requires, or even encourages me to have long beautifully painted nails.  However, look at the top picture, look how well my nails pop against the white on the garter belt.  The picture at the bottom, it would look weird if my piggies weren't painted with those open toed shoes, even with the stockings on.  If you're going to go for a look you should go all the way; especially, as in my case, since these are professional publicity photos.  So yes, I got a mani/pedi, a foot and leg mud wrap, a full set of acrylics and an eyebrow wax, it takes a lot of money to look this cheap!  Finally, I was ready to go have my picture taken! 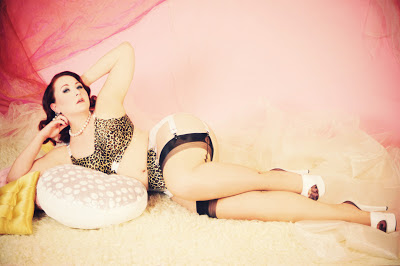 Pinup Girl Cosmetics is a well oiled machine.  One girl was having her pictures taken as another had just finished hair and was going to go get in costume so I could plop myself directly in the chair of hair goodness.  Kellyn, the owner, is the Hair Whisperer.  If you see a picture of me with amazing hair it's either Lee Press On Hair (what I call my wigs and pony falls) or Kellyn did it!  She got me in curlers and then sent me to make-up.  Gina did my make-up, she was super sweet and very efficient!  After make-up I was sent back to Kellyn so she could finish my hair and then I scampered off to change.  I was being a bit indecisive  Kellyn helped me pick out my outfit and then loaned me the necklace and earrings since I had forgotten accessories in my rush.  I went from off the street to a fully realized pin-up in around an hour.  Seriously, they have the transformation down to a science!  One of the things I loved is that the other girls and I all looked like individuals.  We were not all done the same way, we had hair and make-up that showed our personalities and that was flattering to each of us as individuals.  To be that efficient and still keep each girl fresh is what was truly impressive.  My shoot itself was about an hour of well directed poses to make sure that I was comfortable.  I got to do some with and with out my gloves and some with and with out the super awesome gold antique phone they had.  It was fun, relaxing and they took requests!  This was my third photo shoot with Pinup Girl Cosmetics and I highly recommend them.

I was chatting with everyone after my shoot since the girls scheduled after me were running behind and they had a moment.  There are approximately 200 pictures taken for each girl.  200!!  You are given the choice of a proof sheet or trusting Kellyn to pick out which ones she thinks are best.  I always let Kellyn pic, she's never let me down.  The photo shoot came with two (the ones posted here) and in a few weeks I'll have the additional 3 images on a disc with the ones shown for a total of five.  It was only an extra $25 and I feel it's worth getting the extra 3 pictures.  You've already gone through all the hair, make-up and costuming, you might as well get the extra shots.   They do a few special shoots like the Valentine's one I did with them a few times per year so keep a look out to get the extra bang for your buck.  If you're super lucky you'll find a Groupon on Living Social deal which some of my students bought for me a while back which is how I got my Dracula photo shoot I did back in October.  So keep your eyes peeled and let them make you look and feel like a princess...and maybe eat some shrimp and drink some champagne while you're at it!