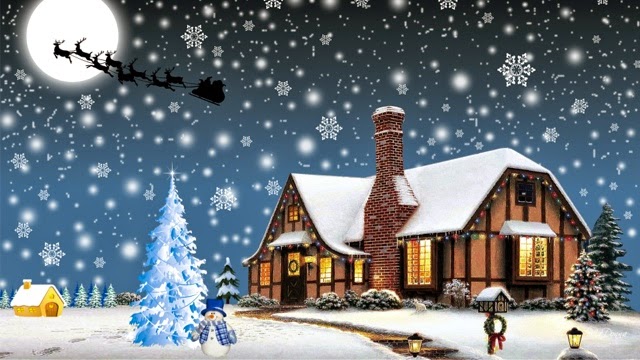 Christmas Eve, used to be when my grandparents allowed me to open one present before Santa came while I slept.  Those days are long gone but I am sitting in the house where it used to happen. Since B and I started dating almost 10 years ago Christmas Eve has become the day we travel to Knoxville when I usually wrap the last minute gifts he bought for his family. We actually bought gifts yesterday instead of today so that's practically like we planned ahead.  It's a weird seemingly slacker tradition, but it's ours and works for us. With his family being in Knoxville and until 3 years ago I would come visit my grandfather as well, we've just stuck to the schedule. Come see his family, get cookies, go see my dad on the way back to Atlanta to do the holiday and give him the cookies B's mom made for him as well.  Tomorrow is my favorite though. B and I will come back to my grandparents house with a ton of cookies and we'll curl up on the couch with them and watch horror movies. That's our private holiday!
Tonight I ran out of wrapping paper. Hopefully tomorrow there will be a convince store open so I can pick up some gift bags for B's mom and sister-in-law's present.  Luckily I was able to get his dad, brother and two nephew's presents wrapped so it's at least mostly done.  I hope you all have a wonderful Christmas Eve and a Merry Christmas tomorrow!
Posted by Unknown at 10:21 PM No comments:

Festivus for the rest of us. What has pissed you off for the past year?  Today is the day to air grievances from the past year to get a clean slate.  A made up holiday that generally makes more sense and has a better chance of actually helping people than most of the other holidays combined.  (The feats of strength are a little weird, but whatever)  It seems so silly, but airing your grievances is much healthier than letting them be bottled up inside of you.

With that in mind, even if you don't tell anyone else, maybe it's a good excuse to make a list of what's been bothering you.  If you can't bring yourself to tell whomever it is, maybe burn the list and try to get it out of your system, keeping it all inside will just make you sick.  With that in mind, I'm going to bitch a little bit.

1) I hate people making me feel guilty for not being able to go out and do things that cost money.  I do not have a regular full time job and most of this past year was me getting my footing as I just finished school in December of 2013.  Things are getting better financially, but I still also have to pay for a house in Oak Ridge that I don't live in.  So please don't act like I'm blowing you off because I am just now getting a little more financially stable.

2) On that note, yes, I have been super busy in the past with school and then work for a while now.  That doesn't mean that I don't miss hanging out with people, I just haven't really been able to.  It hurts my feelings when people's reasoning for not inviting me to things is because they assumed I was busy.  I get that you are probably sick of me not being able to show up for things, but getting invited still really means a lot and sometimes I'm even actually able to show up.  I do miss you guys and I do want to see you and catch up, but that will never happen if you just always assume I'm too busy.

3) And going into the next grievance.... quit standing me up.  I have very limited free time (see above) so when I make plans with you and you no call no show on me it upsets me.  I understand that things happen and stuff comes up, I'm not mad about when people have to cancel because life happens.  It's the not canceling, it's the not hearing anything that really upsets me.  So please, if you know you're not going to be able to make it please just let me know as soon as you can so I don't sit around waiting on you to show up.

I think three is a good number and it get most of the general stuff out in the air.  Anything else would be for specific instances, specific people, etc... and that doesn't need to be publicly aired.  So, what do you want to bitch about on the Festivus?

Posted by Unknown at 6:18 PM No comments:

The Solstice is the turning point, a celebration of the days getting longer which ironically officially marks the first day of winter.  It's a rebirth, a new start, the return of the light.  The New Moon, when the moon is closest to the Earth and yet hidden from the sky by the Earth's own shadow like a creepy stalker trying to get closer to you by lurking in the shadows.  The New Moon is also a rebirth celebration in many beliefs, so yesterday seemed to be a good time to get a new start on the world...my problem is that I don't want a new start.

I guess that's not entirely true, I want a start over.  I want to fix things.  I want to make things better.  I want my life to be something meaningful and creative and not boring, yet I also really want things to be stable and comfortable and safe.  There's a balance in there somewhere, I want to find it.  I don't need to start new things, I just need to be able to do more than one thing at a time sanely.  This means saying no more instead of taking everything on, this means having down time so I can rest and relax, this means also simplifying my life in general.  Less things, less stress, less work.

Maybe this is fitting for the Solstice and New Moon.  Maybe it's right that my life would be turning upside down right now.  Or maybe I'm just looking for a greater meaning for my upheaval than just sometimes things go wrong, go weird, go away and there's no reason for it.  Not even the universe can make sense of it sometimes.  Either way, this next year is going to be something new that I don't know if I'm ready for, but we'll see.
Posted by Unknown at 10:30 PM No comments: