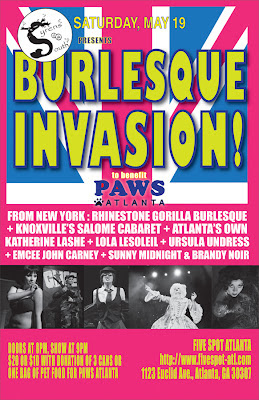 On Saturday, May 19th, Atlanta, was invaded by performers from Knoxville and New York for an evening of burlesque not regularly seen in our neck of the world!  Rhinestone Gorilla Burlesque contacted me back in March or April about coming to Atlanta and The Five Spot had given me May 19th, the exact date they asked about, we decided it was meant to be and made it happen!  As we had a show the night before opening for Unknown Hinson we figured this also would keep us from over saturating with Atlanta performers.  All in all, the perfect plan!

We were joined by ladies from Salome Cabaret in Knoxville as any excuse to have them down is good enough for me.  Delinda d'Rabbit and Kisa von Teasa came down to perform with us both nights so we had an entire weekend of Knoxville goodness!

John Carney opened the show with his Burlesque Show song (Muppet Show theme song rewritten to be about burlesque) and then we kicked off the routines with Kisa von Teasa's sympathy for the devil act, I never get tired of seeing that number.  it has come so far from the first time I saw it almost 5 years ago.  Next came Gemma Stone with her Air Sex routine, it was so simple and yet so brilliant.  By herself she went through a very excited night for the crowd to see.  It was super high energy and the crowd laughed and got a little turned on all at the same time!  Following her was Avian Rush's Bittersweet routine which was beautiful.  It was a fan dance that became a black light routine with her painting her self so you could discover her in the dark.  Seriously elegant and beautiful!  Debra Delorean (which I totally love her name) was next with her Peanuts routine.  Dressed as Lucy, with Gemma Stone as Schroeder, she did everything she could to get his attention away from the piano.  After stripping down she showed off her busts of Beethoven before scampering off the stage.  We then had two local Atlanta favorites, Lola LeSoleil with her Girl from Ipanema routine and then Ursula Undress with her Rockin' Venus routine!  We then went to intermission for a moment of cigarettes, merchandising booze and bathrooms, because that's what intermissions are for!

I opened the second half, debuting/sneak previewing my routine I intend to take to Carolina Burlesque Fest in a few weeks.  I spent all last week working on the costume since I'd been in school for so long and just hadn't had time.  It was the routine I wanted to do at Southern Fried, but I just couldn't get it together in time.  After me we went back to Gemma Stone with The Love Song of J. Alfred Prufrock, I sadly was still putting my clothes on back stage so I missed it, but the crowd loved it and that's good enough a review for me!  Debra Delorean came out in a graduation cap and gown and showed everyone how excited she was to be out of school.  Avian Rush then came out as a G.I.Joe doll and did a very structured strip down to a Barbie doll including having an amazing prop where she came out of the G.I.Joe box and finished in the Barbie box.  Next was Delinda d'Rabbit with her Grindhouse fan dance routine which was high energy and she gave great face!  Closing the show was Kisa von Teasa with Sister Burlesque, nun to Catholic school girl and then bathing in glitter holy water at the end!

Over all it was a fun show, we got to have some amazing performers from out of town and we gathered a bunch of food for the PAWS Atlanta food bank, all in all, a total win!
Posted by Unknown at 2:14 PM No comments: 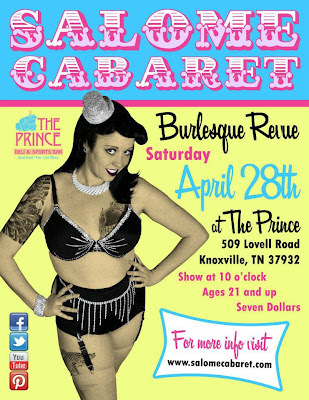 For those of you that don't know, my grandfather passed away back in September.  Since then I have to go to Oak Ridge, TN (right outside Knoxville) approximately once per month to work on the house and try to clear everything out.  One such weekend happen to fall at the same time that Salome Cabaret was having a show so they asked me to come play and I gladly accepted!

The Prince Deli is a tiny Spots Bar type place on the outskirts of West Knoxville.  They have pool tables, amazing food, and a stage that's just right for burlesque.  Beelzabetty spent a great part of the evening dressed as an ancient Golden Girl type character, wandering around the crowd drunk and never breaking character.  When she got on stage with her walker it was everything you could hope for!  Delinda d'Rabbit had an amazing bathtub routine with balloons as bubbles all over her and her bathtub of glittery awesomeness!  There were also some newer performers who rocked it as well as my butt twin, Siren Santina who rocked Baby Got Back and her vocal rendition of Ice Ice Baby will bring a tear to your eye from awe and laughter!  Per their request I did my God Saves routine, frankly with some revamping and pep talks from the ladies I honestly fee that it was the best I had ever performed it.  Thank you to Kisa von Teasa, who did not perform that night, but as the Adminatratrix of Salome Cabaret, she knows how to encourage your ass to do your best because she knows you have it in you!

Over all it was an amazing experience as is every time working with Salome.   They are all so amazingly talented and wonderful people.  Super special shout out to Dustin and John, the most organized and awesome managers ever, I wish I had a pair of them for Syrens!
Posted by Unknown at 10:46 PM No comments: