The Atlanta Photographer's Guild meets every other week in the basement at Elliot St Pub with an assortment of models for both professional and beginner photographers to shoot.  They set up an assortment of backdrops and lights in addition to using the natural brick and bar props that come with the basement.  These events are put together for the most amazing photographer Marc Turnley, known as Brilliant Z.  There are usually 2-3 models who bring 2-3 outfits each and each photographers gets about 10-15 minutes with each model per outfit.

On December 14th they brought back regular model Katherine Lashe and first timer Lola le Soleil!  Katherine started the evening in a top hat, eye patch, corset, Victorian vest and garter belt while holding her riding crop before switching to a green corset and butt bow with black beaded fringe bra and panties, Victorian hat, green feather fans and 7 inch rhinestoned heels.  Lola started out in an amazing assortment of colors and a feather headdress that made her well over 6 feet tall with those long legs.  Her second outfit was covered in layers and layers of 32 inch fringe in different shades of blues that accentuated all of her graceful movements.

Posted by Unknown at 2:01 AM No comments: 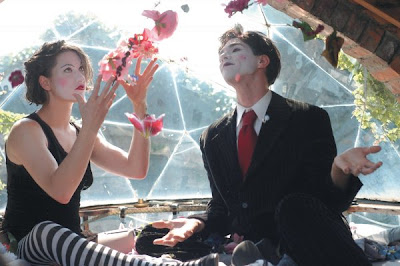 The Dresden Dolls got back together from working on their solo projects to put together a fall tour that came to The Buckhead Theatre in Atlanta, GA.  As part of Amanda Palmer's desire to help promote local performers they booked the band Lille and Syrens of the South.

Syrens of the South opened the show with a short, 30 minute set that included Katherine Lashe MCing and Burnadette Cinders who brought the house down with her bellydance skills to They Might Be Giants' Istanbul not Constantinople and her wonderful announcement that she is with child.  Then the mistress of Illusion Fonda Lingue took the stage and wowed the audience with her shimmy, shake and don't ask don't tell pastie policy.  Closing the show was the legs that make you beg Lola le Soleil with her eye popping balloon act that had the crowd begging for more.

After the Syrens were done Lille took the stage for an amazing home grown act that was a wonderful opener to the amazingness that is The Dresden Dolls.  The crowd went wild and sang along to all of the songs, it was an amazing evening for everyone involved and we hope to see The Dresden Dolls back in Atlanta real soon!

Below see a collection of photos from The Dresden Dolls!

Posted by Unknown at 9:43 PM No comments: 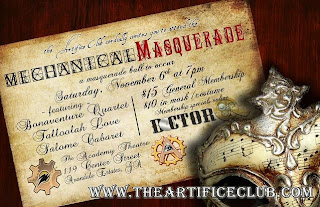 In January of 2010 Syrens of the South began producing an evening of Steampunk revelry entitled The Mechanical Masquerade.  After the July event Syrens of the South passed the torch to Doctor Q and The Artifice Club.    Under new management, The Mechanical Masquerade moved from Bart Webb Studios/Little Tree Studios up the street to The Academy Theater.

The evening was a traditional masquerade with masks being worn until midnight so people could guess who was whom.  The entertainment included burlesque performances by Talloolah Love and Knoxville's own Salome Cabaret and a musical set from the Bonaventure Quartet.  Talloolah Love did her clockwork doll routine, which was her very first steampunk inspired number lo so many years ago, so it seemed only fitting for her to do it for the first one produced by The Artifice Club.  Salome Cabaret performed they're group routine to Pure Imagination from Willy Wonka which is amazingly choreographed with a twisted sexual energy that makes it disturbingly beautiful. There was also a costume contest, sadly I did not catch the winner, but I do know one of the prizes was a weekend pass for Anachrocon.  For those that don't know, Anachrocon is a weekend of all things steampunk!  It includes performances, costumes, panels dances, parties and vendors. This February will be the third year for this rapidly growing convention and interest in steampunk.

Over all it was a very lovely evening and I know that the next event, which is Friday night at Anachrocon, will be another wonderful time had by all.  Below are pictures that have been up loaded from this and previous Mechanical Masquerades (mostly by Kevin whom we love and adore as he is an amazing little shutterbug) on Flickr, enjoy!

Posted by Unknown at 9:23 PM No comments: 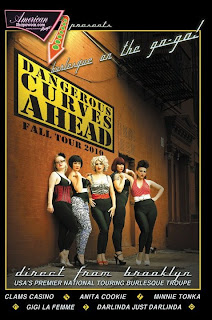 Dangerous Curves Ahead: Burlesque on the Go-Go! is a touring burlesque show that includes Clams Casino, Anita Cookie, Minnie Tonka, Gigi La Femme and Darlinda Just Darlinda.  They picked back up with their fall tour and headed all over the country including Atlanta, GA to come play with Syrens of the South for Halloween!

The show included the bevy of beauties from New York as well as Atlanta's own burlesque legend Torchy Taboo who MC'd the show with some newer blood performing including the legs that make you beg Lola le Soliel, the woman of a million jobs Burnadette Cinders, your host the Syren of the South Katherine Lashe, and The Lady Miss Vagina Jenkins played panty wrangler for the evening.

It was an evening of haunted horrors that included The Ghostbusters, a werewolf, The Creature from the Black Lagoon, a sexy game of peek-a-boo, and more sassy entertainment then you could shake a severed arm at!  There was a raffle with fabulous prizes that included The Burlesque Handbook

, hand made pasties from the Go-Go Girls themselves, and special items donated from Sin in Linen who was helping sponsor the tour along with American Shapewear.com!


Below are some fabulous photos of Dangerous Curves: Burlesque on the Go-Go on Flickr!

Posted by Unknown at 8:44 PM No comments: