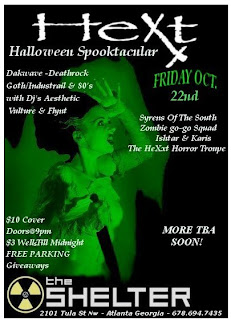 Hexxt is a horror themed club night that pops up for special occasions. Having a variety of performers from Syrens of the South, Zombie Go-Go Squad, and the finale of Chaotic Suspensions.  It was a packed house with people in costume and rocking out for Karis' birthday as well.  There were give aways from Troma Films, Horror Central, Netherworld, Latex Records, Spencer Gifts and More!


The Zombie Go-Go Squad was a group of scantily clad undead girls who danced in on the platforms and in the cages between the acts to get the patrons in the mood.  From mummies to zombies the girls represented all aspects of the undead.


Performing for Syrens of the South included MC Fritzengrueben, Stormy Knight, Fonda Lingue and Katherine Lashe.  Fritz was a trouper since there was not a microphone for him to use.  His years of theater experience came in handy so he could project over the huge crowd.  Stormy Knight did a great strip tease that walked a nice line of classic and more fetish inspired for the crowd.  Fonda Lingue did a classic strip tease and was a vision in rhinestones.  Katherine Lashe closed the show with her Creature from the Black Lagoon routine.

Chaotic Suspensions closed out the night with some suspensions, tug of war and other feats of pierced strength.


Below is a collection of pictures from different Hexxt events.

Posted by Unknown at 2:29 PM No comments: