Syrens of the South's Tease Tuesdays

So each Tuesday since November 29, 2011, Syrens of the South Productions has a free burlesque show at Bull Frogz in Kennesaw, which is just North of Atlanta.  Yes, you heard me correctly, a FREE Burlesque show OTP (Outside The Perimeter for those that don't live in the ATL) each week from 8-10pm.  If that's not enough incentive, each Tuesday also comes with $2 beers and $3 well drinks not to mention very tasty and reasonably prices food as well.  I highly recommend the Mozzarella sticks, in case you needed a recommendation.

Though the line-up changes each week to keep the show fresh, regulars to the Tuesday Tease stage include John Carney, Emmalucious, Katherine Lashe and Rosie Palms.  There has also been performances by Chad Sanborn, Edie Akimbo, Kittie Katrina, Princess Jessikat, Sally Strumpet, Stormy Knight, Ursula Undress and the belly dancing gypsy: Willow.  What can you expect on a Tuesday night?  Many of the performers have been using this venue as a way to test out new numbers and experiment with old numbers.  So not only can you get a sneak peak at what is to come, you can also see some acts that have been packed away for a while getting the dust blown off of them.  Also, as this is an OTP performance and at an all ages restaurant, the ladies always wear full coverage panties and under boob is always covered.  They know there are a lot of fans who can't get into the normal 21+ bars to see the show, so now is your chance to get a peek at these lovelies.

Our ability to continue having this show completely depends on the amount of people that show up each week, so if you would like for Syrens of the South to keep having a FREE weekly show in an area that does not normally get burlesque, please come out and grab a drink and catch a show!

Here is a peak at some of the acts that have been happening for the past two months:

Email ThisBlogThis!Share to TwitterShare to FacebookShare to Pinterest
Labels: atlanta, burlesque, show, syrens of the south 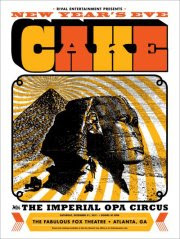 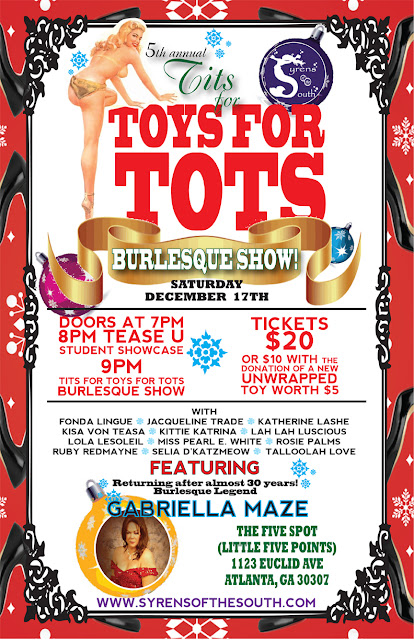 On December 17, 2011, Syrens of the South Productions had a stage full of new performers and some seasoned veterans in an attempt to collect toys for the less fortunate in their 5th Annual Tits for Toys for Tots Burlesque Show.

I got there around 5pm and that's about when the toys started flowing in.  Though the doors didn't open until 7pm, we had advertised that  even if you could't make the show we would accept toys from ANYONE who was willing to swing by and drop them off through out the night.  Before the doors even opened we had already collected around a hundred toys which was an excellent start to the evening.  Back stage, the Tease U Level 1 students were pacing and preparing for their showcase and the old pros were laughing and applying make-up, it's amazing what a little experience does for your backstage attitude.

At 8pm it was time for the students to strut their stuff!  I, Katherine Lashe, took to the stage to introduce my newest batch of students.  Opening the show was Princess Jessikat who wowed the audience not only with her tease, but with her singing voice as well.  Next came our favorite little murderess Sally Strumpet who's red right hand not only stole her clothes, but may have stole the show as well.  On a more serious note, the Rev Robin Sexton (yes, she's really ordained) came on to bring sexy back to the pulpit and not only made much of the audience laugh so hard they were in tears, they also were falling over each other for a sprinkle of her holy glitter so they could be baptized in the church of burlesque!  Keeping the audience laughing was Edie Akimbo who went through spontaneous puberty right in front of the audience's eyes and flashed everyone her rhinestoned beaver!  Then came Stella Doll, who did a reverse strip, showing us how a lady gets ready for a night on the town making putting it on just as sexy as taking it off!  Closing out the solo acts was Sarah Femme who did a classic strip tease to a modern song, the blend of traditional movements to non-traditional music made it a whole new kind of act.  While the students prepared for their group number burlesque performer and teacher Ruby Redmayne took the stage to cheer them on dressed as a cheerleader.  Not like a regular cheerleader, but the cheerleader of your dreams who had strategically placed letters placed all over her very encouraging form.  The Tease U group routine closed out the show with all six students strutting their stuff with a shimmy and shaking of their money makers.  Each student showcase is better then the last and I am extremely proud of all of these ladies for sticking with it for their stage debut!

The main event kicked off with Kisa von Teasa of Knoxville's Salome Cabaret being "that girl", you know, the one that goes to the holiday party and has way to much to drink before being inappropriate.  Luckily for us taking your clothes off in public is absolutely appropriate at a burlesque show and she totally rocked the drunk girl chic!  After Kisa staggered off the stage, Rosie Palms took us to Christmas Island with a promise of beaches and palm trees covered in lights an ornaments to celebrate the holiday in more welcoming weather.  If you couldn't imagine it on your own, Rosie was having no problem heating up the stage to make you feel that beach heat.  Jacqueline Trade took us back to WWII with a beautiful classic strip tease waiting on her honey to come home for the holidays and closed with his entrance and a very passionate kiss on stage.  Selia d'Katzmeow from North Carolina showed the audience how to stay warm in the winter weather while raising the temperature by taking it off on stage.  Next came hometown honey Talloolah Love, through not a holiday number, it was too fabulous to turn away.  She debuted her Southern Peach routine that only made the audience want to take a juicy bite out of her when she was done!  Spinarella's Bella took the stage by force with a giant group number that had a pimping Santa Claus that was thrilled her knew where all the bad girls lived.  With assels, chair work and very well rehearsed choreography this dance routine made the audience go wild and ended with Mrs. Claus busting Santa for his indiscretions and brought it home with her own assel twirling skills.  Closing out the first half was Burlesque Legend Gabriella Maze who did a blend of classic strip tease and robe work before doing some very naughty things with Cookie Monster.  It brought down the house with awe and a laugh before we broke for intermission.

During the second half of the show I handed the MC reigns over to Kisa von Teasa so I could change it to something less comfortable so I could take it off on stage.  Opening the first act was Lah Lah Lucious who sang "Santa Claus is Coming to Town" and then revealed a very naughty outfit with paddle under her robe for when Santa arrived.  Next I came on stage to show my love of Dr. Seuss with my holiday tribute to the Grinch.  After me, Selia d'Catzmeow came back on stage in plaid pajamas and showed that taking it off and putting it back on it a great way to warm up those winter nights, especially when you get to open presents!  Speaking of presents, Lola LeSoliel came out as Santa Claus and handed candy canes to the audience before showing everyone what she really wanted for Christmas which was a boa, a boa made out of money that is!   Putting the ass in class was Pearl E White who did a tribute to the Marine's that would make anyone think boot camp sounded like a good idea, especially with the boots she was wearing.  She somehow managed to be tasteful and trashy all at the same time and rounded out the act with her assels.  Next came a more traditional routine by Ursula Undress with the bumpiest version of "O Holy Night" I've ever heard.  By the time she was done shimming out of her clothes the audience knew why they should fall to their knees and rejoice.  Fonda Lingue came out as Suzy Snowflake with an elegant and beautiful routine, this King of Boylesque is truly the classiest of ladies.  The finale was a very sensual and stunning routine by Burlesque Legend Gabriella Maze who definitely gave us all something to put on our holiday wish lists.  She was wonderful to watch and her grace and poise was truly a window to days gone by.

The whole show was amazing and I am always surprised and blessed by the amazing performers that I get to share the stage is.  Special thanks to Kisa von Teasa for splitting the MC duties with me.  Kisa is a hilariously quick witted MC that rolls with the punches as well as she can roll down her stockings and keeps the audience begging for more.  We raised over 300 toys for Sgt Lopera to take back to be handed out to children all over the Atlanta area.  All the performers take a special joy in being on stage and it's that much more amazing when we do so for a good cause.

Next show: Vixens Valentease Burlesque Show benefiting the Atlanta Community Food Bank, Friday, February 10, 2012 at The Five Spot Doors at 8pm, Show at 9pm, $20 or $10 with three cans to be donated to the food drive!
Posted by Unknown at 3:31 PM No comments: