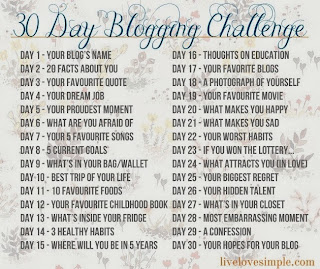 1. I hate people.  Like not as a "oh, I'm better than you" kind of thing, but as a "oh, I'm actually super shy and being around people causes me anxiety".

2. My favorite color has been purple since I was super little.  I apparently requested a purple blanket at the age of 3 from my aunt so it's obviously been a life long obsession.

3. I also really like green, but I used to hate it on the principle that A) I am a red head (have been since I was little) so people always tried to put me in green when I wanted to wear purple and B) it is my dad's favorite color so I decided I didn't like it just to be contrary when I was a kid because I was a jerk.

4. The whole fake geek girl thing annoys me on a couple of levels, A) I have been going to sci-fi cons since I was a kid with my parents.  I was raised in this environment, it's part of who I am.  I should probably be calling out other people for being fake, but I generally don't because we're all geeks about something, right? B) There are fake geek girls, but there are fake geek guys too.  Being a geek is trendy right now and though I love the amount of awesome flicks I get to see in my preferred genres, everyone now thinks they're a big ole geek and an expert because they saw one movie, this goes for both guys and girls.  This annoys me.  Not that they are learning to love all of the awesome things that I love, but that they then think they are the end all be all of geekdom because they saw one movie.  Please, embrace the awesomeness that is geek because you saw that movie, but then please go do your research and realize that that plot line is actually from a multiverse and in fact never actually happened and there are all these other time lines and stories between resets that keep it all fresh and interesting!  If not, it's cool if you like that one flick, but that doesn't necessarily make you a geek.  I kissed a girl once and it was a good kiss, that doesn't make me a lesbian.

5.  I love comic books.  I've been reading them since I was a kid.  I still have the first 50 issues or so of Spelljammer

and now I'm not entirely sure why they were so important to me, but oh well.  I don't focus as much on keeping up with individual issues anymore, I've become spoiled by graphic novels because I feel less like I'm going to rip them, but I do still have an assortment of valuable comics like Suicide Squad #1 and some others.  However they will always remind me of being a kid and have a special place in my heart.

6. My obsession about Cthulhu is genuine.  My dad is also pretty on board with Cthulhu which is where I got it from.  I've read everything that Lovecraft

had published.  Every time I read a bunch of Lovecraft I have really weird dreams for about a month and wish I could remember them well enough to get them written down and do something with them.  They're amazing!

7.  I love books.  This is not a new thing and I'm pretty sure that my love of books is genetic.  I don't remember a time that I wasn't surrounded by books, be it with my parents or my grandparents.  And, though I have an iPad

with the Kindle app, I still prefer actual physical books.  I want to hold it in my hand, I want to feel the paper and the smell of a new book.  Your sense of smell if very closely tied to your memory, it's part of keeping those alive.  The smell makes the stories stick with you better.

has been one of my favorite movies for years.  It's all how to be a stalker and manipulate your way into becoming a famous actress.  I kind of always wished I could be that cool and just magically become famous, but it really seemed like a lot of work and mostly luck.  If I'm gonna put forth that much work for something it's gonna happen and I'm not betting on luck.  Plus, also just not actually that manipulative and sneaky regardless of general opinion.  I wish I was as diabolical as people seem to think I am.

, other super favorite movie.  Exact opposite of All About Eve, this movie is actually way more like my life actually is, even down to the get financially ruined and yet still find a way to be happy.  Say yes to life, have adventures, don't be boring, these are the tenants that I find myself most quoting.  This is the way to live your life, with out fear and with enough reckless abandon that you keep yourself interesting but no irresponsibly so.

10. I'm actually a dog person, but I've mostly had cats.  The first pet that was ever considered mine was my cat Edward.  I was around 6 months old, he jumped into my lap while I was in the car seat in front of a restaurant called Edward's.  He refused to get out of my lap and became mine.  My first dog didn't come until I was 2, she was a basset hound named Lady.  My grandfather traded a gun for her.  In my world, dogs should have big floppy ears and most of this is because of her.  This has actually become an issue as I keep being given cats, Jezebel actually will come when I call her and play fetch with me.  I am a terrible cat owner, I have turned Jezebel into a dog.  However, a dog that uses the litter box is pretty awesome.

11. I once stayed up all night so I could be first in line to meet Clive Barker

when he came to DragonCon.  I got him to sign my program.  I always regretting not having a book with me for him to sign, specifically The Hellbound Heart

.  However, when I won 2013 Best Horror Bunny at The DragonCon Bunny Hutch and then Clive Barker not only liked my picture but then reposted it on his page and the Official Hellraiser page I was pretty giddy.  I am pretty sure dead people in space could hear my squeeing.  I still really want and autographed copy of The Hellbound Heart though.  Also, I do have the 1st Pinhead comic book, it'd be cool to get that signed too.

12. I started sewing when I was like 7.  I wanted a princess dress so my grandmother and I made one together.  We made the pattern out of news paper, we sewed it all, and I recently just found the dress again while cleaning out my grandparents house.  I've been sewing pretty much ever since.  In middle school I started altering store bought clothes and making my own look.  It wasn't until I transferred to a Performing Arts High School that this actually became appreciated and I started sewing for theater productions which led to my internship at The Chattanooga Symphony and Opera Association as a dresser.  Funny that I started out as a dresser and now I'm mostly an undresser.

14. My hair is naturally the color of a penny, a dark copper that bleaches out to about the shade of a new penny if I spend enough time in the sun.  Though I am a natural red head I do dye my hair to a different shade of red.  I've also had black, purple, green, blue, etc... colored hair though purple with fuschia streaks in it was my favorite.  If I wasn't about to go back to doing extra work then I would probably go back to that.

15. I have an IMDB page.  It amuses me because most of the people I know have ones that are much bigger and fancier than mine, however, about once a month an old friend from middle or high school discovers it and messages me like I didn't know it was there.  I also sometimes get weird letter from hard core Walking Dead

fans that want autographs which is weird.  I had one guy who actually found and printed off my head shot and mailed it to me with a return envelope for his Walking Dead collection.  So random.

16. I like the word monkeys.  It's not really as much about actual monkeys but the word.  I just say it randomly for no reason.  Because of this people tend to purchase me monkeys which is sweet, but yeah, not actually obsessed with monkeys.  However, someday, I'm gonna have a trained monkey that will pick up my props and costume pieces after my burlesque routines and then I will be the happiest person in the world!

17. Vampires are, however, a bit of an obsession and have been for as long as I can remember.  One of my goals is to own every vampire movie and book ever made.  This will take a while but it gives me something I can continuously work toward.  I'm not as rabid about it as I was when I was younger, but I still watch all the worst vampire movies with glee and read when I get a chance.  When I was hired to Stage Manage Dracula at 7 Stages I knew I was in the right place.  Still one of the greatest shows I have ever worked on.

18. I really enjoy cooking.  I have a bit of a cook book problem and I wish I had more time to get to actually cook.  So much of the time I just have to dash around from place to place and I just don't have time to make a meal.  I love food and I love to cook food.  I really miss getting to have dinner parties and such so I had an excuse and a reason to do cook.  Sadly our currently apartment just isn't big enough to really accommodate large groups.

19.  *looks at typos*  So in case you haven't noticed, because sometimes the spell check does work, I can't spell.  I have never been a good speller.  When I was in 8th grade I actually had a teacher accuse me of loosing a spelling bee on purpose because I didn't want to participate.  In fact, I didn't want to participate because I can't spell and was super embarrassed about that fact and this was taking place in a gifted class so it made me feel like I shouldn't have been there.  However, I rock at math!

20. I still have my The Dark Crystal

lunch box that I used in elementary and high school.  I even still have the thermos.  I have had a life long love affair with muppets.  Though it could also be a love of Brian Froud

.  However, I stand by that muppets are an important part of my universe and always will be.