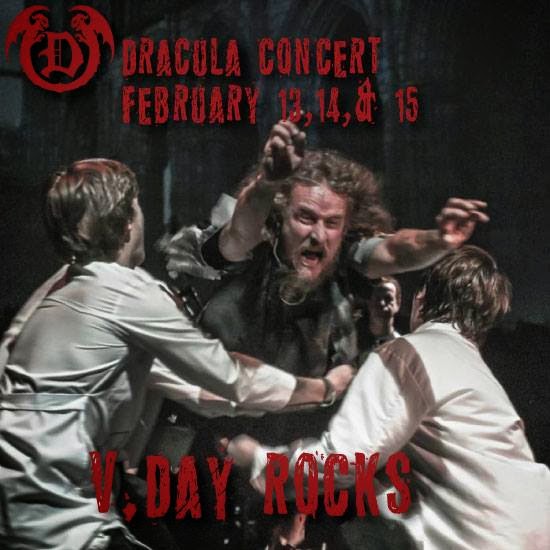 Paper work.  Sending email to update everyone (and remind everyone) that we were to meet at 7pm and do straight run throughs at 8pm...yeah, that was kind of a fail on Monday, but it wasn't as bad as it could have been since Dad's Garage was finishing up a recording for their show and ran a little late THIS ONE TIME us running late was actually a good thing.

We put in the fog machine and the hazer but we didn't test it just yet.  Still playing as I spent a good couple hours during the day adding in the foot lights, refocusing the lights for the band (I'm still not totally happy about it.) and fixed the missing purple Fresnel and decided the back row of green Fresnels not being there was a choice.  When you don't have the time, sometimes you just gotta own that and make it a choice rather than failure.

We got through the Opus with all the versus which made me happy.  Why rhyming mania and Transylvania brings me such joy I will never understand, but it totally does and I sing along like a crazy person.  I love Dracula so much.  I mean, it's been a long love affair since I was around 8, but still, working on this show makes my inner pre-teen fan girl so happy.

I got to start my day by picking up Shane, seriously, Morton Manor is the house that every horror kid wanted to have in high school with all the posters, art work, toys, sculptures, awesome castle treatments on the walls in the kitchen, etc...  I see something new there every time I swing by.  We ran by the theater, grabbed coffee before we borrowed Heidi's truck so we could go to AZA and pick up the coffins.  Being at AZA during the day in the off season is so strange.  The lab looks the same, but we had to go grab some props and asking around in the day light with the windows uncovered is just super strange.  All those times I got used to wandering around in the dark and just trusting I knew the way replaced by blinding light.  So strange...  We got the coffin and the big lid in the truck and had the discussion of which way do we put them in the truck to make sure the corpse in the back doesn't fly out so I don't get pulled over by the cops.

So I was super lucky that people were freaking out before the snow actually started, that means that I got Alex all day yesterday since school was cancelled.  After we unloaded the truck we knocked out all the dead hangs, cleaned up the cables, soft focused everything that was looking kind of rough and got the band lights more focused since I needed to move the light trees around where the amps ended up.  We got a lot done in the lobby after Heidi figured out the best way to deal with the art work that was hanging out there.  Trying to find the balance between the more permanent installations and the ones specifically for the show as well as the posters and advertising for Dad's Garage.  It's a mad house out there.

Rehearsal we pretty much just tried to plow through so we could get everyone out at a decent time.  Everyone was supposed to bring their costumes.  One said they left it at work, one informed me they don't have outfits so I grabbed him a suit jacket from the Secret Room.  Rob and Jed get a shout out for bringing in their costumes as did the ladies.  You can pretty much almost always count on the ladies to bring in their clothing options.

Afterwards Alex knocked out painting the platforms so they could dry over night, we tweaked a few lights and then shut down so we could get out of there ASAP.  By midnight freezing rain started coming down so it was time to go home.  We all were crossing our fingers for our Wednesday night rehearsal to be possible...except I apparently told everyone to ice the parking lot rather than salt it because I was tired.  So if you see Rob and the guys out there trying to make the parking lot freeze that's totally my bad.
Posted by Unknown at 10:18 PM