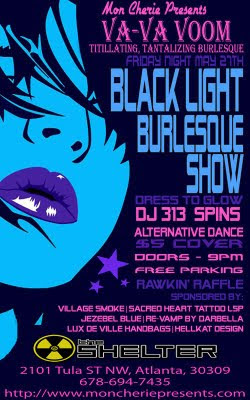 Mon Cherie Presents Va-Va Voom is a bi-monthly burlesque show at The Shelter that has been pushing envelopes and amazing themes for the past two years.  Just when you thought you'd seen everything Mon Cherie bring Black Light Burlesque with body painted beauties and a generous use of iridescent fabrics.  Even the audience was dressed to the glow in the dark nines in body paint and glowing fabric.  You have to admire theme's so great that the audience wants to participate!

Doors opened at 9pm and I got there around 10pm.  I was greeted by the Mouth of the South herself, Miss Mason, screaming out the window for me to, "get (my) barrel rolling ass up stairs and fix (her) hair".  So I scampered up the stairs so go forth and whip hair into action.  We got her rolls up and looking great in under five minutes.  I then went on to help tame the tresses of Tupelo Honey as well.  Who knew that though I can't do my own hair I kick ass at doing others hair.  It had been raining the day before and it was terribly humid so everyone who was attempting to do their own hair was terribly jealous of those of us who choose Lee Press On Hair for the evening.  For those that don't know me, that includes anything from wigs to pony falls.

After helping with the hair emergencies I finally got to wander out from backstage to get my super cool spot next to Mr. Wombat so I could take photos of the show.  First up was our lovely FemC, Miss Mason, encouraging everyone to buy raffle tickets, by her shots of SoCo and to tip.  After some fun time with black light reactive bubbles, it was time to start the show.

The first set opened with a duet by New Orleans Jon and Tupelo Honey.  He sang while she did a seductive strip tease with occasional aid from him.  Once she had gotten past her glowing white gloves and white fringe she began stripping him before he removed her top and she sauntered off stage, never showing the audience a thing.  It was a great blend of live vocals and a truly tantalizing tease!  The next act was a seductive strip with a belly dance base done by Stormy Knight.  Bathed in a white robe with blue hair she looked like an Anime Angel.  When she took off her gloves her nails glowed under the black light which I thought was an amazing touch.  She shimmied her way in and out of her robe and top with an amazing rope and yarn belt that glowed and swayed with her movements.  Following her was Scarlett Page who took the most advantage of white under a black light dressed as a nurse.  She stripped and strutted to Alice in Chains making everyone want a physical exam. Closing the first set was Kittie Katrina to Bjork's It's Oh So Quiet which seems to be a favorite among performers.  Se did an amazing job with being the only performer not using white and was covered in pink and other colored glowing ties wrapped around her and in her hair.  She did a great job with the dynamics of the song with pulling you in during the slow quieter parts and then exploding with energy during the up swings.
It was a great way to end the first set.

In between sets DJ 313 kept the dance floor back and the bar was slammed from everyone that couldn't take their eyes off the stage during the show.  There were girls dancing in the hanging chain cage, glowing gals riding the quarter pony rides and many enjoying the additional show of the rowdy and borderline raunchy that the patrons were putting on in their drunken enjoyment.  Sometimes people watching the crowd is just as much fun as the amazing and talented performers on stage.

The second set opened with The Chameleon Queen painted fully like a Van gogh and performing to Siouxsie Sioux (it happened to be Sioxsie's birthday) with her Sally Rand Fans.  It was absolutely beautiful the way they moved around her seemingly effortlessly and at speeds that should not be attempted by an inexperienced fan dancer.  It was an amazing display of swirling beauty and skill.  After The Chameleon Queen wowed the audience it was time for the ladies to come up to to the front.  New Orleans Jon came to serenade the ladies with a wonderful rendition of Wicked Games.  There was a bachelorette party in the audience and the bride to be received a kiss on the cheek after his performance, I dare say that was probably the high light of her evening.  Closing out the evening was Stormy Knight fully painted and doing a sultry strip tease out of what appeared to be sheer bed sheets giving the performance a very intimate feel, as if you were sneaking a peak into her bed room.  She showed off some amazing acrobatics from shimmies to back bends and was an amazing high note to end the show on.  Curtain call brought everyone back out semi clothed to take a bow with all of the performers as well as the master mind behind Va-Va Voom, Mon Cherie.  It was an amazing night and I can't wait to see what she comes up with next.


Below are my photos from the shows, please enjoy!