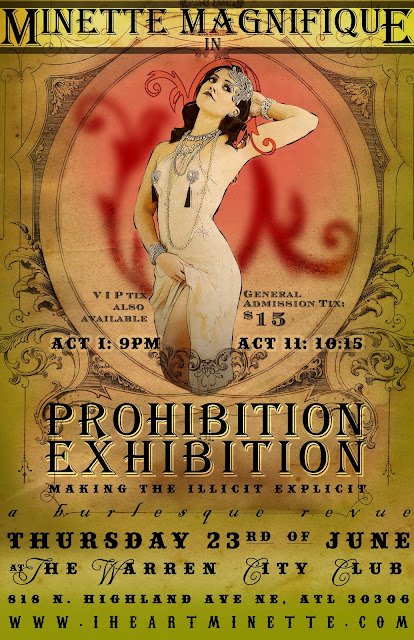 Minette Magnifique invited me out to The Warren City Club to take photos of their Prohibition Exhibition and I was thrilled to accept the opportunity to take pictures of such lovely ladies!  It was a little tricky to find as it's in the Virginia Highlands and on the third floor above the Dark Horse Tavern and you have to enter behind the back patio.  It is a private club and if I hadn't been told where to go it would have stayed very private, all it needed was a secret knock and it would have been perfect!  Instead it had a very friendly door guy who checked our ideas, marked that we were supposed to be there, handed us drink tickets and let us wander in.

Once inside it was a beautiful bar with couches, VIP tables with champagne, and a deck outside that was amazing to stand on and over look the area.  I should say that it appeared to be a beautiful bar, it was fairly crowded when I got there at 8:30pm, by 9pm when the show was to start it was shoulder to shoulder standing room only.  The drink tickets we had been given were for a drink special that was made of whip cream flavored vodka and cranberry juice.  Way better then the regular vodka cran that most bars serve, probably would have tasted like a creamcicle if it had been orange instead of cran, highly recommend the combination!  I snuck out to the patio and got a side view of the stage so I could see the show and not be quite so confined.  They ended up opening the patio to the rest of the patrons as well, glad I hopped out early before they did so.

The show opened with Baroness VONschmalhausen Femceeing the event and introducing their stage kittens and welcoming everyone to their special Prohibition show.   As she spoke the stage slowly filled up with lovely ladies in kimonos, dressed as Geisha with long cigarette holders lounging around on pillows as if in an opium den.  Once everyone was lounging about and the Baroness had finished speaking it was time for the first act.  Madame Wiley came out to "Straight to Hell" by the Clash dressed in a breathe taking blue kimono with a red silk fan that she quickly stripped out of down to her tassels giving the audience the first thrill of the evening.

Once the bevy of beauties had cleared the stage it was quickly replaced by a work bench as well as Geppetto and his very naughty doll played by Vyolet Venom.  When ever his back was turned she began stripping away her clothes and the crowds inhibitions, though he tried to right both when ever he caught her in a misdeed.  It was a fun act, a great blend of sex and humor that had the audience rolling with laughter.  After clearing the stage of all of her naughty puppet bits and the work bench they brought out a large white screen in preparation of the next act.

Behind the screen was a light so Mimi de Milo went back and forth from stripping on her seti to doing so behind the screen and giving the audience a sneak peek of her silhouette in shadow form.  She began as a vision of green sparkles and ended up in a shadowy black outfit doing stocking pulls which she played like an upright bass.  When her strip was done she grabbed her scarf and scampered off stage while the lovely pick up artists wrangled her clothing and props.

Baroness VONschmalhausen had some time to shine with her story of "My Tommy and His Gun" with the "Our Gang Theme Song" as her back up music.  It was an amusing tale of her time with a rum runner and how she wish him luck by kissing and stroking his gun before he went out.  It was just the right blend of dirty innuendo and period slang to really capture the audience's attention and keep them laughing and waiting for more.  I asked after the show and yes, she did write it herself, so extra bravo to her for that.  After her tale she brought out a lovely suffragette with her own tale to tell.

Darcy Lemmonier has been a good and proper lady her whole life and was the star off her charm school, her first day out she saw a handsome man and promptly forgot everything she'd been taught.  Loosing control to "Howlin' for You" by The Black Keys, she tossed her book, her glasses and shortly there after her clothes to the glee of the audience.  Proving it's the quiet book worms that you have to watch out for!

Next up was a Brazilian exotic by  the name Carmen Corazon doing a hula hoop strip to "Cuban Pete" by Desi Arnaz.  She swayed her hips and managed to take off her corset and everything else while doing it.  Once she got down to the skimpier bits she dropped the hula hoop and spent some quality time in the audience.  This was apparently too much as an officer from the Vice Squad came out to chain her up and thrown her in the Paddy Wagon!  While the Baroness grabbed a drink to get over the shock it was obviously time to take the intermission.

During intermission the crowd swarmed the bar to grab drinks and wandered out to have cigarettes on the patio.  The Fire Marshall had been called due to over crowding.  Someone called them because they were jealous of the success of the burlesque show.  Silly people, boobies always win!  Once the crowd had settled back into their places it was time for the second act.

Opening the act was Mimi de Milo and Vyolet Venom doing a duet to "All That Jazz" by Catherine Zeta-Jones from the Chicago Soundtrack.  It was well done with synchronized dancing and stripping with enough room that you could still see their individual personalities shine through.  They wandered out into the audience with glove pulls and boas to really get the audience back involved for the second half of the show.

After the dueling tassels it was time to bring back out our good girl gone bad, Darcy Lemmonier.  Completely embracing her darker side she performed to "March of the Hookers" by Blair Crimmins and the Hookers.  She teased and tantalized with her big black boa drawing the crowd in to her new found naughtiness!

Apparently our little lawbreaker broke out of the Paddy Wagon, proving you can't keep a bad girl down, but she kept on the chains for a more bondage slant on the tradition tease.  Done to "My Body is a Cage" by Arcade Fire, it was a sensual strip but seemed a bit out of place with the more Prohibition era inspired acts of the rest of the evening.

Next was Madame Willey doing "Singing in the Rain" by Gene Kelly and Cyd Charisse.  In a shiney emerald green dress it was very reminiscent of an outfit used in the movie.  One of the joys of live entertainment is that sometimes things go wrong.  Though Madame Willey did a beautiful strip until the malfunction, she won the audience back by saying "Shit Happens" and laughing it off.  They stayed on her side even through the malfunction thanks to her care free attitude.

The next performer was a surprise, finally of age, stage kitten Luna Lynx was ready for her debut!  Covered in a pink corset and tons of feathers, her outfit reminded me of one from Moulin Rouge with Nicole Kidman.  Dancing to "Pink Champagne" by Louise Goffin she had a great time popping her cherry and her cork and sharing her champagne with the audience.  She did an amazing job, full of good energy, and it's always nice to get to see someone's debut.

It was then time for Baroness VONschmalhausen to say thank you and do curtain call before the ladies broke into the Group Finale to "The Golden Age" by The Asteroids.  Matching outfits and shimmy belts made a fanny filled fond farewell.  Once they were done they celebrated Carmen Corazon's birthday with song and spankings!  Afterwards the ladies filtered into the audience to do meet and greets as well as photo ops with the fans.

As my Flickr Pro account has expired and I do not currently have the cash to renew so I can't post my pictures for you all.  My apologies and I hope to have it up and running again very soon!
Posted by Unknown at 12:00 PM