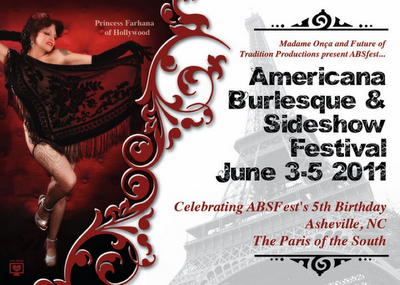 This year celebrates ABSFest's 5th Birthday in Asheville, NC, The Paris of the South!  The creation of Madame Onca, this yearly event celebrates the disciplines of burlesque and sideshow making it just as much about the variety as well as the striptease.  With acts varying from jugglers, vocalists, magicians, pole performers, drag kings and queens, aerialists, belly dancers, and of course the ecdysiasts!  The very first festival back in 2006 was headlined by the multi-talented Princess Farhana of Hollywood who reprised her role as headliner this year to celebrate five years of amazing performances.  Princess Farhana is a world renowned belly dancer, burlesque performer and teacher of both disciplines.  I was fortunate enough to perform at the second ABSFest and the event opened with a documentary about her that was amazingly fascinating.  After seeing all she's accomplished in
both worlds it was truly an honor to be asked to share a stage with her this year.

As a performer let me just say how amazing everyone that was involved in the festival.  We were given amazingly detailed emails as to what information was needed from us for the producers, for the sound engineers, for the lighting techs, and for the prop and panty wranglers.  Everything was beautifully organized, professional, we were all given time on stage in an efficient manner so we could all do walk throughs, go over sound cues and prop placement.  So before I go through the rest of the festival, let me say thank you to everyone that worked behind the scenes that may or may not ever get thanked or acknowledged.

The festival actually started with a red carpet gala on Friday night at The Bebe Theater.  The infamous Purple Party Bus provided by La Zoom carried the performers on a quickie drunken tour of Asheville while being entertained by each other.  The write up for this event went as follows, "The theater bus pulls up, the glittering artists disembark, tumbling along the Red Carpet in a swirl of laughter, and the party starts. This is just the beginning of a three-run of debauchery and high art... a teaser, if you will. The Opening Ceremonies will be hosted this year by Philadelphia's comedy storytelling duo, Sidetracked, and are followed by awards, performance, live music, appetizers and more."   I wasn't in town for it this year but having been on the bus for the 2nd and 3rd ABSFest I am well aware of what silliness goes on.

One of the things that I love about this festival is all the classes.  Belly dance, burlesque, MC, Aerial, Ukulele, Hooping, Juggling, fire and even some private sessions with Armitage Shanks to have some one on one time polish up numbers.   Many have been performing for years but you never quit learning.  My theory is that if Dirty Martini and Jo Boobs are still going to pop in and take classes when they're out of time then no one's too good to take a class.  So if you ever get a chance to take a class from people as amazing Armitage Shanks or Princess Farhanna please hop on it, you won't regret it!


The Saturday Specatular was held at The Orange Peel.  The space is just amazing; huge stage, great lighting and sound set up, and plenty of room for the audience and a burlesque bizarre lining the walls for everyone's shopping needs.  There was belly dance attire, circus attire, steampunk accessories as well as many other items that one might need to remember the event.  The show itself held up to its name and was truly spectacular.  It was a blur of aerialists, some amazing pole work to Max Raabe's version of "Let's Talk About Sex", Salome Cabaret's Ula Uberbusen did a spectacular tribute to crazy cat ladies everywhere with the evening punctuated with Princess Farhanna performing twice, once belly dancing and once doing burlesque.  The entire event was MC'd by Armitage Shanks who did an amazing job with introductions as well as some wonderfully creepy songs including closing the show with "Pink Elephants on Parade" from Dumbo for curtain call where all the performers and audience were encouraged to get in touch with their inner pachyderms. It was an amazing festival and I wish I could have been there for all of it, but being there for at least part of it was still enough to take my breathe away.  If you get a chance I highly recommend submitting to perform or even just going to be in the audience and take the classes for the 2012 event.


There was no photography at the event so I wasn't able to take more then a few backstage snap shots but you can see many of the amazing performances on the ABSFest YouTube Channel.  Below are some interviews with Madamce Onca about ABSFest.