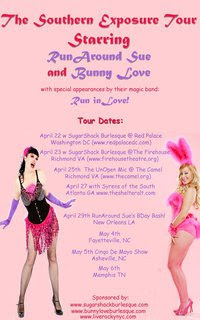 The day came and with tornado warnings and torrential down pours happening all over the South, we all braved the storm to come out!  Thus proving that neither rain, nor sleet, nor snow or dead of night will keep these girl's clothes on!
Katherine Lashe (me) MC'd the show and we kicked off the event with one of our special guests, Miss Bunny Love!  Bunny Love did a sexy tribute about her love of chocolate to 'At Last' by Etta James.  Her classic strip tease took a comedic turn as she shoved her face into her box of chocolates.  Not every day you get to see a girl shove her face in her own box.  Next came The Make it Happen Girl, Run Around Sue!  She did a very elegant fan dance strip tease that was beautiful.  She had larger breast plates attached above her pasties, it was a brilliant idea and work wonderfully on stage as part of her strip tease.  Then was Ruby le Chatte  in her professional debut with her Blues for Angel routine she did at Southern Fried Burlesque Fest.  It was slinky and sultry!  Following her was Miss Pearl E. White doing a very classic leg show to "Don't You
Feel My Leg" which had the crowd begging for more.  Closing out the first set was Lola le Soliel debuting a brand new number!  It was done to 'Fish Camp Woman' by Unknown Hinson and she came out in a waitress out fit and had the best facial expressions to go a long with her hard working waitress diner striptease.  It was both sexy and funny and everyone was willing to kiss her grits as we took a brief intermission.
Our second set began with Brandy Noir doing her Vegas inspired one woman rat pack to Frank Sinatra's, 'I've got you under my skin'.  Next came everyone's favorite solo act, Rosie Palms, doing a high energy school girl number to 'Sexy and Seventeen' which made the crowd want to study a little harder.  Then Miss Pearl E White came back out on stage to do her Rocky Tribute to knock the audience out one more time.   We closed the show with our special guests.  First was Run Around Sue doing her Cheetah Routine which was a super sexy zipper striptease.  She had zippers undoing all sorts of part of her costume before it came off making the audience hold their breathe waiting for the reveal.  She also used a giant balloon as her cat toy which included some very interesting acrobatics as well.  The finale was Bunny Love doing a number full of hope as she started on the stage covered in newspapers as a very sad looking homeless woman.  As the music of Elvis' 'Amazing Grace' swelled so did everyone's hearts as she was transformed into an angel and took a stunningly beautiful glitter shower on stage.
The whole evening was a lot of fun and other then the weather it was an amazing night.  Very grateful that the ladies tapped us to perform with them as it's always so much fun to see what the rest of the country is doing in burlesque. You can see Mr. Wombat's photos HERE.
Posted by Unknown at 12:00 PM