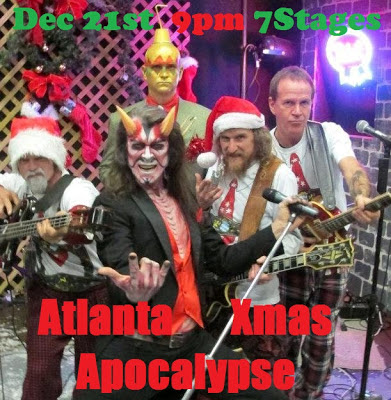 So the end of the world was supposed to happen on Dec 21, 2012...obviously that didn't happen.  To celebrate this auspicious occasion, 7 Stages with The Little Five Points Rock Star Orchestra decided to put together a holiday show hosted by Santa with  Satan, Black Jesus, The Grinch, Scrooge, Mrs. Claus, Krampus singing while there was burlesque, aerials, sacrifices, crucifixions, pericers, suspensions and more Virgin Marys then you can shake a stick at!  This was actually their 4th year of having a blasphemous Xmas, however, with it being the end of the world they decided they were going to step it up a notch!  I was lucky enough to be asked by Heidi Howard, the director, to Stage Manage. I also worked with Dee Dee Chmielewski on costumes (most either she had made for the previous years or she and I raided and altered out of our personal stashes) and some how I let them talk me into performing as well.  And did I mention that we put the whole show together in under a week?

We had some meetings a few weeks before to go over an outline.  The Friday  one week, before the show we had a band rehearsal so they could get familiar with the music.  Monday we had a meet and greet to go over the outline of the show, assign final parts and talk through everything that we needed to do while the band hand one last music rehearsal with just them and the singers in the other room.  Tuesday, we brought in the band and staged the first half of the show.  Wednesday we ran through what we had already staged and then finalized the staging for the end of the show.  Thursday we had our preview show with a modest audience, mostly friends of the performers that couldn't make it out for the show on Friday due to other commitments.  Friday, the most awesome, amazing show in the whole world!


I am always amazed yet never surprised by what this group can accomplish.  After working with most of them during Dracula, we definitely have a comfort level for working together, but A WEEK?  Seriously, everything came together in the amazing cacophony of chaos that only worked because of everyone's dedication, perseverance, and willingness to never say no but always saying "yes, we can totally make that work!" no matter how weird or insane an idea was.  I am honored to get to continue to work with this amazing group of people and I was so glad that I was able to pull in some of my burlesque and circus family into this show.  I keep joking that I am happiest hiding in a dark theater, but really I am happiest being around amazingly wonderful and creative people!
Posted by Unknown at 12:00 PM