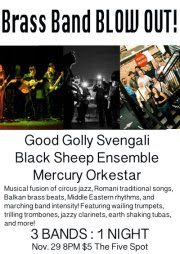 So Tuesday we finish up our meeting for Atlanta Xmas Apocalypse and I am checking my calendar to realize that we moved our next meeting from Thursday to Friday so I can now go to the Brass Band Blow Out that some friends are playing.  The problem, when everyone you know going is on stage, who do you stand in the back and drink with while making comments?  Luckily, while talking this out, Heidi said she would go with me, so on Thursday I got my girl date on and went to the Brass Band Blow Out at The Five Spot.  The band line-up was Good Golly Svengali, Black Sheep Ensemble, and Mercury Orkestar.

For those that don't know, Good Golly Svengali is the name of that awesome band you guys listen to when you come see The Imperial OPA Circus.  Yes, they have a name and are a band in their own right, not just the soundtrack for the hi jinx you watch on stage.  They've been doing more gigs as just the band and branching out all of their original music from just what you would expect to hear while watching acrobats balance on each other and then fly through the air with the greatest of ease.  They've added in a lot more guitar and some very funky rifts an even though it was not an OPA show there were improv dancers popping up all over the bar that felt moved by the music.  They were the only band who had guitars, a violin and an accordion   The rest of the night's bands were almost entirely brass.  Wango and Pyramid are super funky and may be my favorites out of the new tunes, but there will always be a place in my heart for Sketchy Gypsy.  I did love the addition of Lorenzo, who plays sax, singing a French folk song.  After four years of High School French I could not understand a word.  Heidi was translating it for me, it sounded pretty dirty but I suppose everything in French sounds dirty.  For the final song Black Sheep Ensemble came out to play along with Good Golly Svengali and that was the most brass I have ever seen played at one time outside of a symphony or orchestra.  The Five Spot was so full of performers playing and dancing around that you could feel the resonance in your entire body.

Black Sheep filled the stage with performers, easily 20 musicians on stage.  They did a great job but I'm not as familiar with the song they were playing.  It seemed more traditional marching sounds, and as I often see them at festivals playing as a marching band that would make sense.  One of the things that I did love was that they all looked like they were having fun.  Did I also mention that Laorenzo also performs with Black Sheep?  So he got to do two sets back to back, but he seemed to be having fun! 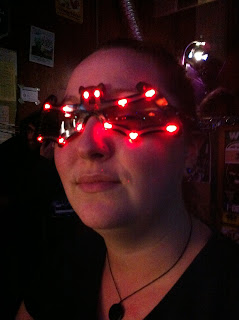 Closing out the night was Mercury Orkestar.  They were a little rowdy but were obviously having a great time which made them fun to watch.  I think they were a good choice to close as by the time they went on everyone was a little drunk and since Mercury Orkestar rocked out to some covers it was easy to get a drunk audience into the groove with things they knew.  Most memorable to me was their amazing cover of More Human Than Human by White Zombie, Let Me Stand Next To Your Fire by Jimi Hendrix and a super fun rendition of Conga by Gloria Estefan and the Miami Sound Machine.  It brought the improv dancers back out along with the drunks and was very much a party at the end of the night atmosphere.  Which is how the glasses happened...

Over all it was a fun show and everyone seemed to have a great time!  Highly recommend going to catch any of these bands if you see that they're playing.

PS.  Good Golly Svengali will be closing out the night at the Syrens of the South 6th Annual Tits for Toys for Tots show on Dec 8th at The Five Spot.
Posted by Unknown at 12:00 PM