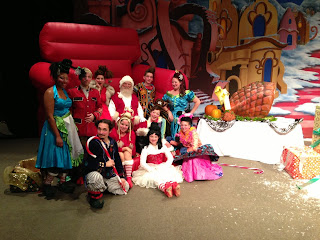 Though most of you know I do burlesque, I also happen to have done years of theater from serious roles to musicals.  Yup, this ecdysiast is also a thespian.  Deeds was asked by Luminocity to put together a cast of around 10 performers for Life University's Holiday party.   The theme was a Whoville Christmas. We rehearsed the choreography, got zany costumes, threw in a little body stacking, and some singing and boom, SHOW!  Dee Dee put the entire show together in about two weeks from digging out the costumes, choosing the music, picking the performers (and replacing the ones that ended up having conflicts) and creating the choreography.  It was a blast to do and the audience seemed to really enjoy it. I know if I thought I was at a boring Christmas party and then people in crazy outfits and insane hair started popping out of wrapped presents I would be entertained! 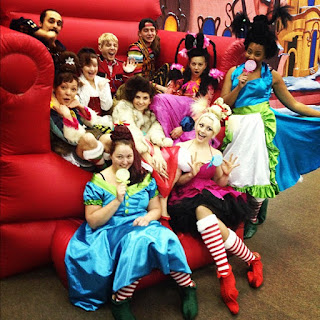 So yeah, sometimes it's really nice to be on the other side of the stage.  I've been stage managing a lot more lately and not spending as much time on stage.  It was a lot of fun, I got to wear a fun costume, crazy hair and some really silly shoes.  Mostly, this is a yay I got to do something cool post with some pics!