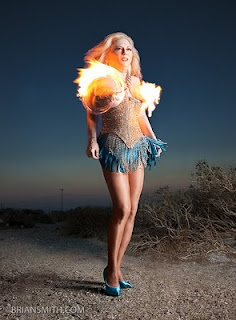 Satan's Angel, The Devil's Own Mistress and Queen of the Fire Tassels, is a burlesque legend that has had an amazing and interesting life and career.  Her love affairs read like a celebrity who's who list of the 60s and 70s and her career is full of adventure in an attempt to over come many instances of Murphy's Law.  Her one woman improvisation show has been touring all over the country and I was lucky enough to catch it at The Allways Lounge in New Orleans when I was in town for the Burlesque Festival.  The show included a slide show of pictures of her as a baby and of her all through out her amazing career.

Angel told stories about how she ended up performing by winning the amateur night so many times they offered her a job and how she came up with her name.  Some of Angel's stories we're funny, some were touching and some were absolutely heart wrenching with the way she was treated being a gay performer.  The loss of jobs, the physical and mental abuse was all a part of her journey as a performer in a time when it was not okay to be gay.  The show was very moving and multiple people were crying at various points through out the show.  Her life has been an amazing tapestry of love, performance and a struggle to be treated like a human being regardless of her sexual orientation.  I spoke with her afterwards and she said that she felt it was one of her worst performances, but it was also one of the more open and
personal performances as she spoke openly about her drug addiction and her recovery.  You really get a sense of how things were, both good and bad.  Stage door Johnnies bringing minks and diamonds to the performers but it was at a price of personal freedom, body image and the basic human right to love whomever you want regardless of gender.

Satan's Angel is a favorite Burlesque Legend among the neo-burlesque performers as she is very personable and very approachable.  She is extremely out spoken and always willing to give an honest opinion about a performance or a costume.  Sometimes she's known for being a bit of a hot head but that's part of her drinking, smoking and foul mouthed charm.

I was allowed to take picture of the show, as per usual, I do not claim to be a photographer, but I like to take pictures!  So I hope that you enjoy them and there are some lovely images at the end of all the neo-burlesque performers, who were there to watch the show, on stage with Satan's Angel.
There's even some awesome jazz hand action, lol.

Email ThisBlogThis!Share to TwitterShare to FacebookShare to Pinterest
Labels: 2010, have tassels will travel, new orleans, show