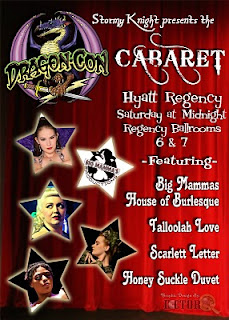 For those of you that don't know what Dragon*Con is:

"Dragon*Con is the largest multi-media, popular culture convention focusing on science fiction and fantasy, gaming, comics, literature, art, music, and film in the universe!" - from Dragoncon.org


What does that mean to the layman?  Dragon*Con is a geek themed, five day party, with your favorite celebrities, costumes,  dealers, shows and panels that are all involved in the Sci-Fi, Fantasy, Horror, Gaming and other generally nerd-tastic themes!  Remember those guys that got picked on for being smart in school that grew up to become Bill Gates? Yeah, those guys, this is their version of Club Med!  Dragon*Con occurs in Atlanta, GA each year over labor day weekend.  It now includes four official hotels and approximately 50,000 people attended this year.


Some of you may be wondering, how does a classic themed burlesque show fit into the craziness that is Dragon*Con?  I'm going to tell you a little story.  Once upon a time (2006) there was a girl (me) who had been asked to do a fashion panel for the Dark Fantasy Track at Dragon*Con.  This panel ended up being a hot mess and didn't happen.  The next year
(2007), the Dark Fantasy Track Director felt a little guilty and took pity on the poor girl and put together a burlesque panel on his track where she was to cover the History of Burlesque and perform.  That same year The Chameleon Queen (f/k/a Diamond Ice) performed an impromptu Sally Rand Tribute during the band The Last Dance's set.  These two events were so well received by the convention that there was an obvious need for burlesque, here enters Stormy Knight.  Stormy Knight has been a volunteer at Dragon*Con for many years as well as an accomplished bellydancer and burlesque performer.  She proposed the idea of the Dragon*Con Cabaret and it was tacked onto the end of programing in a spare room to see how'd it go, the response was over whelming... Fast forward to 2010, this is the third year that Stormy Knight has produced the Dragon*Con Cabaret with both local performers and those from all over the country that have come in for the convention.


This years line-up included MCs and members from Big Momma's House of Burlesque in Charlotte, NC, including Big Momma D herself.  Her rendition of "You Gotta Have Boobs" was an amazingly well done comedic song and striptease that not only showed off her great vocal talents, but her wonderful comedic timing and over the top personality as well.  She also sang "Bring on the Men".  Boston's own Honey Suckle Duvet did a very seductive performance to "Bad Things" by Jace Everett which was extremely well received as it is the theme from HBO's 'True Blood'.  The Violet Vixxxen, Nashville, TN, did a super cute routine to New York New York in top hat tails and all!  Katherine Lashe (me) did a classic routine to a mix of The Silencers by Viki Carr and Peter Gunn.  Fonda Lingue did a reprise of the routine from the Student Showcase in April.  Atlanta's Mistress of Illusion got to in-trance a whole new audience, I'm still not sure if they knew about her something extra because of her feminine grace and beauty.  Miss Kitty Love, Atlanta, did a sugar plum fairy routine with an amazing confidence and grace that drove the crowd wild.  Freya West from Nashville, TN, did the act I also saw her do at the Dallas Burlesque Festival and I didn't mind at all.  She's an amazingly graceful and flexible performer and has some of the best stocking pulls I have ever seen in my life.  Local favorite Ursula Undress brought the house down with her tribute to Bettie Page to the song Wild Cat.  The Sweetest T in the South, Atlanta's Talloolah Love, did her 'New Dawn" routine that brought the crowd to a hushed mesmerized silence during her routine until they erupted into applause watching her rolling around in her fur. Closing out the show was the impeccable Scarlett Letter.  All the way from California, she did an amazing Judy Garland act with a high energy dance routine and one of the most intricate costumes with some impressive deconstruction ideas that I had never seen used before.  The four feet of red hair and miles of bad intentions was an understatement as she disrobed and won over the audience with both.


I do hate to admit that I know I am leaving out two performers who's names I didn't catch, and of course it's the guys.  There was an bellydancer all the way from Alberta Canada who had an amazing shimmy and balance and he did so with a candelabra balanced on his head.  There was also a gentleman of 1000 voices that told us stories and was a welcome reminder of the vaudeville skits from ages past.


Over all the show was a lot of fun and a great mix of local favorites along with imported talent.  The audience loved it, well very receptive and just the right mix of drunken rowdy and respectful.  I took some backstage video, because that's what I do, so I hope you enjoy!