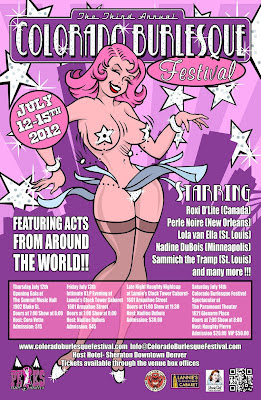 So at 2am on July 4th I decided I needed to go to the Colorado Burlesque Fest because I have missed so many festivals this year due to being too busy to apply and I really missed my burlesque family.  It was one of those random occasions as I had just gotten back in touch with an old friend I hadn't seen in 10 years who also happened to live in Denver, Kisa von Teasa had done the "hey, you REALLY need to come to this" as had a few others and there were some personal things that came up so the universe was telling me to get out of town and get my ass to Denver.  So I found a cheap ticket, got a room with Amber Ray and made it happen.

Thursday I was doing my oh crap packing as that's how I roll while I was waiting on Burnadette Cinders to come by to take me to the airport in exchange for two jars of Jalapeno Pickled Okra and lunch at Our Way Cafe.  I considered it to be a fair trade.  I got to the airport to take off at 2:30pm, hopped the plane and landed in Denver at 4:10pm, you have to love loosing two hours for the time change.  Miss Ida Claire was kind enough to come by to pick me up and take me to the hotel since she was already in town.  I got to the hotel and tracked down Amber and my other roomies Sirena Maria and StrOker Ace.  I had just enough time to get in the room and get ready for the Opening Night Gala at the Summit Music Hall!  I met up with Kisa von Teasa and Celtic Smith and got some amazing 3rd row seats for the show.  It was hosted by the awesomeness that is Cora Vette, I always love watching her MC.  She has such an amazing voice and stage presence that even with all of the horrible and tasteless things that come out of her mouth, you still love her...actually that's why you love her, but still.  The Thursday night show seemed to be more of a local showcase with a few other performers thrown in, seemingly most of Albuquerque.  The show over all was amazing and a lot of fun.  A few highlights included Sofia Soubrette and Naked Vegas with their fruit stand routine, Cherry Glitter Bomb and Shayne McMunchin with their Tarzan routine, Vivian MirAnn with her Minnie the Moocher routine and Perle Noire celebrating her birthday with an improvised routine with Cora Vette singing.  During the curtain call everyone sang happy birthday to Perle and then Lola van Ella distracted her while Sammich the Tramp snuck up behind Perle to hit her on the ass with a Shaving Creme Pie.  It was rather epic!

After the show we all went back to the hotel for the after party in the hotel bar.  It was a lot of very silly and tired drunkenness as many of the attendees had just gotten in that day from many different time zones.  It was like a very rowdy family reunion where you actually like everyone that you're getting to see and is full of genre (and larger) celebrities like Roxi D'Lite, The Bishop of Burlesque and many others. After some time in the fray a splinter group of us were starving and ran off to the Denver Diner.  First, it was an adventure of trying to find where the diner was, which considering it was approximately three blocks away and the people walking got there the same time we did...there are a ridiculous amount of one way streets in a city we didn't know in our defense.  I ended up seated between Ida Claire and Vivian MirAnn so there was much hilarity in our little corner.  I think it was mostly the discussion of assorted bacon and other meats, but I truly feel even closer to Vivian than I did before that meal.  The food was eh, the service was pretty horrid, but hey, it's a 24 hour dinner where you can watch people bring in their tranny hookers they've bought roses for, which was kind of sweet. Would have only been better if the creepy frat boys at the table next to us had quite sending over their obnoxious emissary to bug the crap out of Vivian.  I think he was trying to hit on her but it was so odd and uncomfortable it mostly just made us want to leave and immediately take a shower.  So we left to go back to the hotel and get some rest before we kept the amazing weekend going.