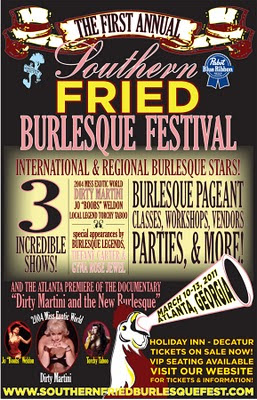 Many years ago I (Katherine Lashe) was kicking around the idea of producing a burlesque festival in Atlanta.  I spoke with other people around Atlanta and it seemed like a huge undertaking I just wasn't ready for.  A few years go by, probably close to 100 shows produced and having attended tons of festivals, I felt a little more ready to take on the task.  In March 2010 I began having talks with The Holiday Inn Conference Center in Decatur, GA, with assistance from Ursula Undress, since she's an experienced wedding planner by day.  By the end of April I had a contract and by the end of May I had put down the deposit.

By June, Ursula had gone from an advisor to doing all of the graphics as well as being a co conspirator as to the direction the festival was taking.  When we realized that people were actually interested and we were indeed having a festival we were lucky enough to be joined in January 2011 by Ruby Redmayne who rounded up sponsors and vendors in lighting speed!  All of this hard work is what lead up to the First Southern Fried Burlesque Fest (SFBF).

On Wednesday, March 9, 2011, I picked up our headliner, international burlesque star, Dirty Martini; documentary director Gary Beeber; and our stage manager for the festival, the Bishop of Burlesque, David Bishop.  I got them settled in at the hotel so I could run an errand and get ready for dinner.  After meeting up with Ursula Undress we went to Watershed Restaurant for an AMAZING dinner.  I highly recommend the Crawfish Pies and Creamy Stone Ground Shrimp Grits with Toasted Pullman Plank, though there was nothing on the menu that wasn't delicious.  Afterwards we dropped them all back off at the hotel and went for our last night of sleep before the festival.


Thursday, March 10, 2011, we did some last minute errands before making our way to the hotel to set up registration and prepare for the Cock-Tails Party and Atlanta Screening of Dirty Martini and the New Burlesque.  Ursula went to pick up The Headmistress of the New York School of Burlesque, Jo "Boobs" Weldon; The Burlesque Mayor of New York, Jonny Porkpie; and Burlesque Legend, Tiffany Carter. The hotel was descended upon by international burlesque glitterati for sweet tea, pigs in a blanket, fruit and cheese trays provided by the festival; with cocktails at the bar.  Once the snacks had cleared everyone went into the ballroom to watch the documentary.  It was an amazing film that really got behind the glitz and glamor of the "new burlesque" and how things have evolved.  Afterwards I moderated the Q&A so everyone got to ask questions of Gary Beeber and Dirty Martini about the film, burlesque, film making, etc... It was a really great experience and very informative.  We're hoping to continue you the tradition of having screenings of burlesque documentaries and themed movies to show burlesque's influence on the screen as well as on the stage.


Friday, March 11, 2011, at 9am had vendors open selling wares and began the series of classes offered at SFBF.  One room held all of our movement classes while the other held all of the lecture classes.  There were dance, stage presence, craft, history, prop, and other amazing classes offered by neo-burlesque performers, burlesque legends, and other members of the burlesque trade.  While classes were going on the Friday night performers were doing their tech rehearsals.


Friday night was the Free Range International Burlesque Showcase and The Hatchling Student Showcase.  The talent for the Free Range show was amazing and included performers from all over the world and opened with Atlanta's own Big Mike and The Dames Aflame doing the full Elvis Gospel Choir to bring the energy up for the show, then came Kisa von Teasa (Knoxville), Vivienne Vermuth (Dallas), Katherine Lashe (Atlanta), Lola Spitfire (Denver), Mitzy Cream (Toronto), Iva Handful (Seattle), Moxie Sazerac (New Orleans), Chad Sanborn (Atlanta), Lady Ginger Licious (New Orleans), Dolly Derringer (Athens, OH), a very pregnant Ursula Undress (Atlanta), and Lydia de Carllo (Vancouver) rounding out the show before the Legends and Headliners took the stage.  First up was Gyna Rose Jewel who wowed the crowd with her classic moves and light up robe and pasties.  It was an amazing blend of classic burlesque with a modern twist.  Next was Jonny Porkpie (New York) who showed his Olympic level routine and brought the house down with the perfect blend of sex and humor.  Then came Burlesque Legend Tiffany Carter who smoldered with sex and she strutted her classic take on burlesque in a beautiful tribute to her friends who had passed and showed the audience why she was a former Miss Nude!  Following Tiffany was Jo "Boobs" Weldon, doing her classic tribute to Gypsy Rose Lee in gold fringe flying everywhere seemingly brighter then the sun.  Closing the show was Dirty Martini with her kick ass tribute to Tura Satana and the bad girls of old dressed as Batman.  It was high energy, fun and amazing.


The Hatchling Student Showcase almost brought a tear to my eye.  I MCed the show as I usually do for the students, but Tease U students from Atlanta's ABCs & 123s of Burlesque students were joined by Knoxville's Salome Cabaret Burlesque Academy's Students, who opened the show.  First up was Nipsy Tussel who had amazing stage presence and was totally fearless!  Then came Nica Luna who was done up as a Day of the Dead character with amazing make-up and costuming, it was hard to believe it was her first show.  Then came the Atlanta students, beginning with Sunny Midnight who showed us all her "Love Whip" and how sexy being awkward can be.  Following her was Ruby le Chatte who did a sensual dance that would make a French lounge singer blush.  Teacups Devereaux showed us how much she wanted to be evil which is against her seemingly sweet disposition.  Brandy Noir did a Vegas Style routine that would have made the Rat Pack proud.  Closing out the show was Pearl E. White, who knocked out the audience with her Rocky tribute.


Saturday again began with classes while the vendors were selling their wares.  The evening brought The First Annual Southern Fried Burlesque Pageant!  Best Duet included Freya West and Mr Exposition (Nashville), Queertini Time (Austin), and The Fister Sisters (Knoxville).  Best Variety included Catatonic Raucous (Atlanta),  Bourgeois Betty (Augusta), and Tim Monteith (Atlanta).  Southern Fried Burlesque Queen included Vivian MirAnn (Albuquerque), Red Hot Annie (Chicago), Siren Santina (Knoxville), Hottie McNaughty (Seattle), Madame Mae I (Vancouver), Lola le Soliel (Atlanta), Wham Bam Pam (Washington D.C.), and Honey Cocoa Bordeauxx (Dallas).  While we were tallying votes our headliners took the stage.  The Godfather of Atlanta Burlesque, Torchy Taboo, did a tribute to Gone With the Wind that showed her magnolia roots.  Our MC for the pageant Jonny Porkpie did a routine that included an amazing fan dance and fringe in to emphasis his *ahem* attributes.  Dirty Martini did an amazing number to Purple Haze that made the crowd go wild with her flurry of feathers.  And the winners are....

Once the excitement of the Pageant wore down it was time for the Dirty South Showcase which included some of the best performers from all over the Southeast.  It opened with Lah Lah Luscious (Atlanta), Delinda d'Rabbit (Knoville), Rosie Palms (Atlanta), Dolly Dee (Charleston),  Rachel Riot (Fayetteville), Kittie Katrina (Atlanta), Curvature (Atlanta), Fonda Lingue (Atlanta), Lysa Strata (Memphis), Tupelo Honey (Atlanta), Salome Cabaret (Knoxville), and closing out the show was Torchy Taboo who did her Tiger routine which had all the grace of the cat she was portraying.  Afterwards there was some naughty picture taking in the lobby since all the hotel rooms have windows facing down, it was an exhibitionist's and a voyeur's wet dream. We've spoken to the hotel so there's a good chance we'll be able to recreate this again next year!

Sunday, March 13, 2011, was a day for recovery!  With the time change we didn't get started with the Legend's of Burlesque Panel until 10am.  For two hours, patrons could ask questions of Gyna Rose Jewel, Tiffany Carter and Torchy Taboo.   Questions ranged from how burlesque was and where it may be going and everything in between.  It's a great time to get to know the Legends and hear how different it used to be.  I always love hearing about the stage door johnnies that would bring flowers, furs and marriage proposals.  If only that were still true today!  After the Legends Panel, Dr. Sketchy's Atlanta had a special session with many of the performers from out of town who don't normally get to model in Atlanta.  It was also one of the few times photographers were also welcome at Dr. Sketchy's since there was plenty of room for sketchers and shooters alike.  My keyhole ended up being the perfect backdrop for all the girls.  The Queen had a great time posing with her tiara!

Overall, we were really pleased with the applicants, the performers that ended up being picked for the shows, the teachers, the legends and some amazing volunteers!  I'm very pleased to announce that we will be doing this again next year at the Holiday Inn Decatur Conference Center on March 8-11, 2012.  They've already confirmed that we will again have the $99 a night deal plus breakfast in the morning as well.  Next year will be bigger and better and we're already planning for some amazing after parties and trying to figure out a good way to take advantage of the indoor pool!  We hope to see you there next year and we're currently accepting 2012 Sponsors with some half price packages and discount weekend passes at only $100 until August 1, 2011, when they go up to $150.  We'll begin accepting applications for performers from August 1, 2011 thru November 15, 2011 with all applicants being notified by January 1, 2012 so everyone has plenty of time to plan their travel and get cheap advance flights.
Here is the slideshow for the Southern Fried Burlesque Fest Group on Flickr.  I know many of the photographers are in the process of getting their pics up but I wanted to make sure that everyone could find it!
Posted by Unknown at 11:24 PM