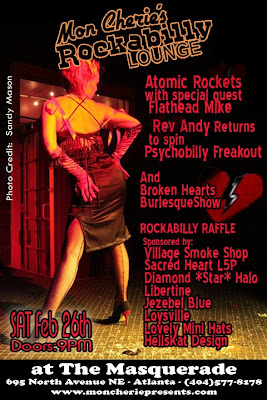 On February 26, 2011, Mon Cherie's Rockabilly Lounge once again descended on Purgatory at The Masquerade!  With Jello Shots a plenty to lubricate the crowd, it was a night of rough and rowdy rockabilly!

The Atomic Rockets with special guest Flathead Mike was the house band for the night.  It was good to hear them rock out with their proverbial cocks out to a very appreciative crowd!  In between sets Rev Andy spun a Psychobilly Freakout to keep the sing dancers swinging and the crowd hoppin'!  There was spins, jitterbugs and jive a plenty.  It was as if the dance floor was transported back into a 1950s dream where everyone was having a great time.

The sponsors had some amazing prizes for the raffle, including gift certificates to Sacred Heart L5P Tattoo, some interesting "tobacco paraphernalia" from Village Smoke Shop, along with some other amazing prizes.  At $5 for one or 3 for $10, the raffle tickets are a steal considering the value of the prizes you win.

The burlesque show started at midnight with myself (Katherine Lashe) as the Mistress of Ceremonies with broken heart burlesque performances for the end of the Valentine's Day month.  Starting the show was Jacqueline Trade with her giant wrench that put most of the men in the audience to shame.  Stormy Knight did a naughty house wife routine that showed you what really happens in the kitchen.   New Orleans Jon came out and did an amazing act with assistance from Tupelo Honey.  I would love to tell you what this act was, but in the hopes that they may do it again I will not give details about the awesomeness which works best as a surprise.  I can tell you it was 80s-tastic!  There was an amazingly awesome woman who did an act with fire that was smoldering with sex....I suck and can't remember her name, hopefully someone will correct me!  Rounding out the show was Katrina Laveaux all the way from Birmingham, AL, to be the undead voodoo queen everyone calls on when they have a broken heart.

Over all the night was an amazing gathering of creme de le creme of the Atlanta Rockabilly scene.  Pompadours, victory curls and fabulous fifties fashions as far as the eyes could see. Below are some photos tagged on Flickr for Mon Cherie's Rockabilly Lounge, they're kind of random as far as which dates, but I have faith you'll still get the feel of the events regardless of when the pictures were taken.