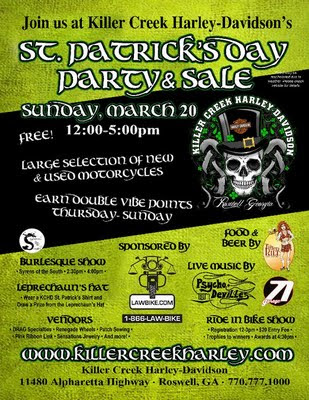 After hauling much fabulous booty back from Jackson the day before, Syrens of the South Productions hauled buns to Marietta to take it off for a bevy of bikers!  We were very excited to once again share the stage with our good friends The Psycho Devilles who have been touring all over the world and stopped by home to shed their amazing brand of rockabilly on the crowd!  They even had some of the lovely ladies performing hop up on stage and do a little dancing during their set.

There were two sets during the day, it's always strange doing burlesque during the day, daylight is not a friend to the burlesque queen but we always make it through!  Having performed for their St. Patrick's Day Party back in 2009 we were super excited to get to come back as it was such a great time and we just love getting to drool over all the amazing bikes!

Katherine Lashe MC'd both sets.  The first included D'lilah D'lite performing her love of Guinness with her giant pints.  Following that was Brandy Noir's professional debut after her amazing beginning at The Southern Fried Burlesque Fest the week before.  She performed as a one woman rat pack to Frank Sinatra's "I've Got You Under My Skin".  Ruby Redmayne was a crowd favorite with her Sugar Daddy routine that includes her amazing disappearing pantie trick!  Closing out the first set was Kittie Katrina showing the crowd her high energy Kittie Kat Love  With her feathery tail and fuzzy ears I'm sure many of them would let her curl up on their bikes for a cat nap!

The second set opened with D'lilah D'lite doing a classically naughty routine with a feather boa that tickled every one's fancy! Then came the hour glass and a half Tupelo Honey with her delectable dark side to A Demon Like Me.  Roses weren't the only thing crushed under her heel, I'm pretty sure she had the audience's hearts as well!  Closing out the show was Kittie Katrina, who was going to be performing to Bourbon in His Eyes, but we had a bit of a malfunction with the CD.  So she totally rocked the improv to a song she'd never heard before and you wouldn't have known with the way she danced and totally rocked the routine!  This is not the first time I have seen this happen to a performer, but it always amazes me the level of professionalism and dedication it takes to pull something like that out of your ass, she already had my respect, but now she has my admiration as well!

Below is a slide show of pictures from the event that include a few highlights from the burlesque show as well!

Email ThisBlogThis!Share to TwitterShare to FacebookShare to Pinterest
Labels: 2011, atlanta, show, syrens of the south