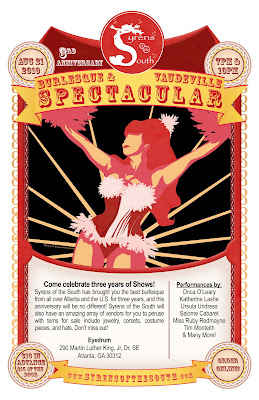 What do you get when you get a grab bag of the Southeast's best performers, tell them they have the freedom to do whatever act they want and put them in front of an audience?  You get the Syrens of the South 3rd Anniversary Burlesque & Vaudeville Spectacular!  Performers for the anniversary show included:
MCs Fritzengreuben and John Carney;
Asheville's Americana Burlesque and Sideshow Festival Producer and World renowned entertainer and teacher Onca O'Leary;
Knoxville's Salome Cabaret including the amazing Kisa von Teasa who performed in the Best Debut category at the 2010 Burlesque Hall of Fame;
Syrens of the South Producer and internationally recognized performer and teacher Katherine Lashe;
Miss Viva Las Vegas 2010 Runner-Up and Texas Burlesque Fest 2010 Audience Pick Ursula Undress;
The Mistress of Illusion and Atlanta's Queen of Boylesque, Fonda Lingue;
The Master of Puppets and Pastor of Muppets, the amazing Mr. Tim Monteith;
The Vivacious Vixen and Sultry Songbird Lala Lucious;
The Master Magician Chad Sanborn;
The hour glass and a half and Southern Sweetie, Tupelo Honey;
Every man's favorite solo act and the longest stems in Atlanta, Rosie Palms;
Everyone's favorite pick-up artist Burnadette Cinders;
Atlanta's newest burlesque sensations and recent Syrens of the South ABCs & 123s of Burlesque graduates Miss Ruby Redmayne and Miss Lola le Soliel!

Does that sound like a big 'ole mouth full of performers?  Well with 17 acts it sure was!  I would love to go through and mention in detail each and every performance, but then this would be a novel.  The out of town guests we're a hit with both of Onca's acts being with out back up music for a very intense experience and Salome Cabaret bringing the sultry striptease of Delinda Rabbit, the zany antics of Siren Santina with her 80s montage tribute to Rocky and a dryer sheet fan dance by the Maytag Man, Kisa von Teasa that created the cleanest dirty thoughts anyone had all night.  Fonda Lingue and Ruby Redmayne showed us two different sides of feathers while Ursula Undress and Lola le Soliel cornered the market on fringe!  Burnadette Cinders taught us to work hard for the money while Tupelo Honey showed us the lighter side of being homeless.  Chad Sanborn came out with a new trick, Tim Monteith came out as Liberace (though I thought Liberace was already out) while La La Lucious lulled us into love with her amazing voice.  From bump and grind to slap stick, from sultry song birds to a belly laugh, this show had it all!

After three years of shows and bringing in guest performers from all over the country, Syrens of the South has been actively working to make the Atlanta and Southern Burlesque scene be known North of the Mason Dixon Line and West of the Mississippi while helping Atlanta see what the burlesque world looks like outside of the South.    Hopefully, as Syrens continues to travel and teach, there will constantly be a new batch of performers and more people to celebrate each of the many more anniversaries to come!

Hope you guys enjoy a little backstage video!  There might have been some accidental nudity...hope you're not offended!
Posted by Unknown at 6:11 PM