This is a review of the Syrens of the South Fourth Student Showcase.  I'm not going to lie, as I am one of the teachers for the Syrens of the South ABCs & 123s of Burlesque Class Series, I am about as biased as a mother is to her children; but let me tell you I am one proud momma!  Talloolah Love and I made a point to break out the nice evening wear so we weren't shown up by our new students since they're costumes were to the nines!  We had a mixture of students that started late into the fall classes or couldn't make the Third Student Showcase in December and students that started brand new with the beginning of the class series in January.  I am going to go in order that they went on stage:

We were very excited to have our very first student MC Fritzengrueben, which I am sure I am misspelling so hopefully he will correct me.  As I can't spell I did introduce him as "Fritzy Pants" which backstage somehow turned into "Fritzy Pants Off Dance Off"...but I digress.  Fritz used to perform on a regular basis in theater when he was younger and this student showcase was the first time he had been on stage in about seventeen years.  Though he was a little nervous before we brought him out on stage he quickly loosened up and rolled with the punches with the help of his flask.  He was prepared with jokes, he handled the heckling well and treated all of the performers with respect.  As he has also been helping us behind the scenes with lights for quite a while the heckling from our regular patrons and staff was fairly epic and he handled it with flying colors!  We're very excited that he's planning on continuing to MC with us at shows in the future and hope that the rest of the world will enjoy him as much as we did.


Lola Le Soleil opened the show with a remake of the Pink song Get The Party Started by Dame Shirley Bassey.  First of all, I know that many other people may be familiar with that remake, but I was not.  The song is awesome and really set the mood for her whole number.  With a character background as an international jewel thief her costume was appropriately bling-tastic.  Lola has a background as a dancer and she has been trained in both salsa and belly dance so moving on stage was nothing new to her, but being in a solo situation with a character she created and taking a little bit off was brand new to her and she handled it with grace and confidence of a veteran!  We're really excited that she is interested in continuing to perform after her debut so we'll hopefully see more of her miles of legs and miles of smiles again really soon!

Next up was the vivacious vixen Sukie Tawdry who's tag line is that she's thinking of going into interior decorating as her carpets match her drapes!  She came out with big hair, blue eye shadow and a spectacularly shiny blue sequined cocktail dress in her Vegas tribute with the song Sugar Daddy by Tom Jones.  She was the embodiment of slow and sensual as she peeled through her clothes.  She was the only performer that decided to utilize props this evening with pulling jewelry her "sugar daddy" gave her as well as doing some impressive chair work.  This, along with her incredible shrinking panties, made her a tempestuous treat for the audience.  She had never really done much performing before and she took to it like a fish to water and definitely "Sukied it to us".  We're happy to add her to our roster of performers and we are hoping to be showing her off as our guest at the Burlesque Hall of Fame Reunion in June...in the blue sequined dress of course!


Last, but certainly not least was our second ever boylesque student and our first boylesque student to do it in drag!  Fonda Linguel (pronounced "fonda ling") was the epitome of classic burlesque with the song Zip Strip by The "Keep Your Shirt on Band".  Her tag line is The Mistress of Illusion and a well deserved tag line at that.  Fonda was a professional ballerina dancer and has been doing drag for quite a few years now when she decided that taking that next step to taking it all off to show just how good an illusion it was.  Obviously not new to the stage and our most experienced performer out of the student showcase, Fonda Linguel embodied the art of the tease, taking the audience for a wonderfully classic and classy ride.  We are sure to expect great things out of this performer career and can't wait to share this treat with the world of boylesque!

We're very proud of all of our students and a special shout out goes to Vaniety Wolf who was supposed to perform, but a bout of strep throat kept her out of the show.  You can catch her debut at our next student showcase in August before the Syrens of the South Anniversary Show! 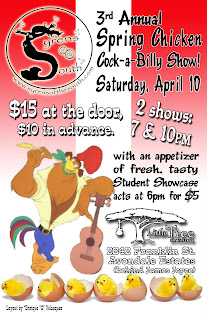 After the Student Showcase we delved into the silliest show of the year, The 3rd Annual Spring Chicken Show.  Yes, I said 3rd Annual, we live in Georgia and there's fried chicken on every corner.  When I first moved here in Nov of 2001there was a Church's and Popeye's directly across the street from each other on Ponce de Leon and they both had enough sales that they both stayed in business for years until the economy tanked...The Popeye's won.  As I am uncomfortable reviewing shows I produce I'll give you a run down of what you missed if you weren't able to make the show....

I sadly wasn't able to take any pictures of the Spring Chicken show because I was busy backstage with my changes, but I did get to take a decent amount of photos of the students.  Also, as an added bonus, we got a special surprise visit from Sadie Hawkins and Dickie van Dyke from Blastoff Burlesque so there's some pictures of those shenanigans as well!  You can check out my photos from the night in my Flickr set, and you can always check out the Syrens of the South Flickr Pool to see what everyone else took!

And, just on principal, you too can order your very own 21" rubber chicken so you can be prepared for next year!
Posted by Unknown at 12:55 AM