Keeping your cool on fire 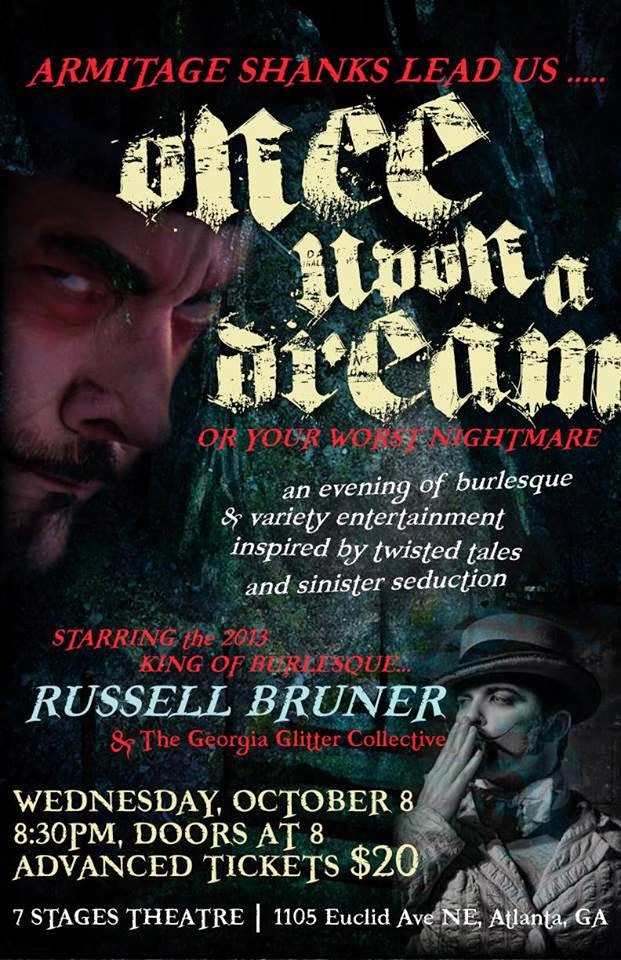 On Wednesday, October 8th at 7 Stages I was lucky enough to be a part of an amazing show put on by The Georgia Glitter Collective, which is a collaboration of many of the performers in Atlanta.  This particular show had a star studded cast both on stage and off as well as amazing special guests Armitage Shanks, Russell Bruner and Mistress Kali.  Ursula Undress and Sadie Hawkins did the bulk of the heavy lifting leading up to the show, Roula Roulette was Stage Manager and I (Katherine Lashe) was Technical Director.

As far as the show itself, it was an amazing experience and there were so many wonderful acts.  I was lucky enough to get to perform with Jed Drummond, who is a local Atlanta musician.  We have done this act once before and it went really well so we figured it was as good a time as any to do it again.  Jed played his guitar and sang his version of Paper Roses while I did my routine.  The routine isn't overly complicated, but the catch is that I have flash paper roses that I light up and end with lighting two attached to my pasties.  Again, I have done this before, I have been playing with fire in one capacity or another for around 15 years, not nearly as scary as it sounds.  However...

For the past month I have been extremely busy with The Doctor, The Devil & My Dad at 7 Stages (we actually did the burlesque show on DDDs set) and had not had time to go and collect the items I needed, including the flash paper.  I went to Atlanta Costume/Norcostco and they had some, but flash paper doesn't have an expiration date on it...and it should.  It turns out it was old, instead of a short burst of fire it was slow burning.  I started getting nervous when I put the flower from my hair to the candle and saw how long it took, more so when the one from my garter also took a while.  As a result, the culmination of the act ended with slow burning flash paper attached to my pasties.  it was the big flash that you always get, but it was almost 5 seconds.  This doesn't sound like a long amount of time, but believe me it was enough.  Below is the video of my performance recorded on my phone, it's not great, but it's what happened.  Me getting more and more nervous with each passing light of the flowers.


As you can see, I did not freak out on stage, no one knew that it didn't go exactly as planned, not even Jed who escorted me off stage.  I didn't want to freak out the audience or the other performers as there was still the entire second half of the show to go through.  As soon as we hit the dressing room however I took off my pasties my slightly melted wig, brushed out the part of my hair that was burned and then began digging through the First Aid Kit trying to find aloe or burn cream or something.  I ended up rubbing Neosporin all over myself, B picked up aloe with lidocaine on the way home so I could use it.  It wasn't until the next day that I realized what I thought were minor burns were actually second degree.

The funny part of all of this is that the only bandages that I can put on my breasts are panty liners with wings.  They are the only things big enough with the right shape to go over my DD cup injuries.  Plus the sticky on the back keeps them in place in my top so I can keep them protected.  I am on day seven now, the blisters that cover most of my chest are sloughing off and painfully revealing the new skin.  I am on my second day off since the accident as the day after and three following days I had to run DDD.  So I'm currently trying to take it easy, rubbing aloe and Zim's Wound Care on my burns and taking Vitamin E and Fish Oil to help try to jump start my healing.  That, along with sleeping most of the past two days, I seem to be on the mend.  Now I know how Uncle Frank felt in Hellraiser.

Moral of the story: always be careful, always be prepared for something to go wrong, and keep your cool!...and never use old flash paper!
Posted by Unknown at 4:02 PM