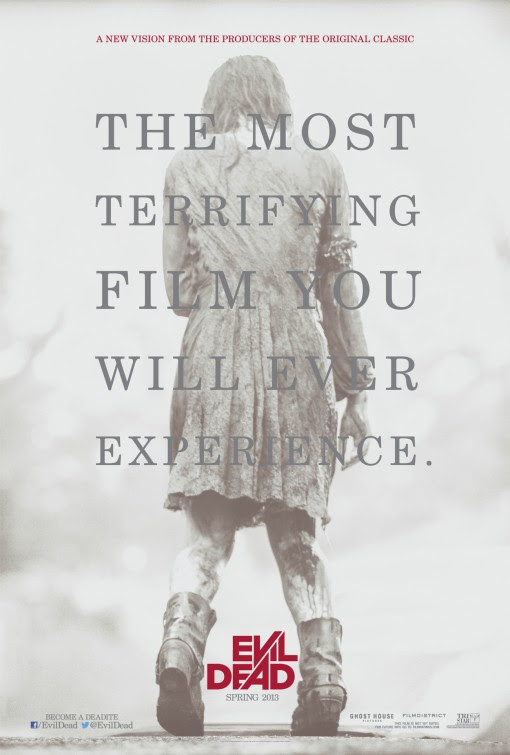 I was lucky enough to get free preview passes for Evil Dead last Tuesday before it was released to the public.  I have been a huge fan of the original Evil Dead series for years and have the collector Necronomicon versions of ED 1 & 2, the 1st one is even autographed by Bruce Campbell!  I saw Army of Darkness in the theater with my dad back in 1992 when it was released.  I have t-shirts, mash-up tees, action figures, etc... So yeah, I'm a fan.  I knew walking into it that it was not going to be in the same story arc as the original.  It's set in modern times, there is no Ash, and it's not supposed to be funny.  I like to think that 20 years later someone not quiet as awesome as Ash found the book and this is what happened.  So treat it as a new story line and let it stand on it's own.

Let me start by pointing out they had a lot to live up to.  Every die hard fine knew that this was supposed to be a legitimate horror movie and most of the die hard fans are also rabid horror movie watchers, so not only did they have to live up to the Evil Dead franchise, they were going to be compared to every other horror movie ever made!  I really enjoyed the over all story arc, it was true to the already established universe and still managed to stand on its own.  There were some wonderfully done special effects, one of my favorites was something you couldn't yet see, you just heard it for a good 30-40 seconds before you saw what was happening.  You knew what you were about to see, but the anticipation and hearing the wet sticky sawing as the camera creeped closer into the flickering darkness...yeah, it was a great moment.  There were a couple of great moments, some were gory, some just creepy and some were laugh out loud funny.  There are some amazing tributes to the original series in both some of the cinematography as well as little things like a beloved prop or two and some very familiar injuries as well as a special moment for die hard fans at the end so stay through the credits...all of them.

I really enjoyed the movie and it's already set up for a sequel...this makes me happy.  I'm probably going to go see it again because it was fun and I like a horror movie to be scary.  Everyone keeps trying to make vampires sparkle, werewolves be brooding boys next door, and zombies to have a heart that they're not trying to eat.  It was nice to see the monsters be monsters; manipulative, vicious, and evil.  Nothing sparkled or wanted to talk about feelings, thank God.  So to wrap: go and enjoy; you'll laugh, you'll cry, you'll scream!