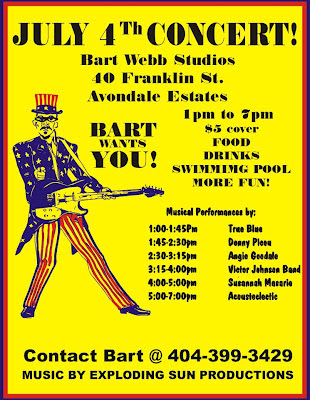 So after a week being up all night multiple days to finish to the float it was finally THE BIG DAY!  AECAFI, who puts on the Art-B-Que each year, has been putting a float in the annual Avondale Estates 4th of July Parade the last few years under Bart Webb's direction.  This year Bart chose the Avondale Avengers as the theme.  The AECAFI float featured a bald eagle's head at the front with a large beak that opened and closed (I actually upholstered the beak) with a front chrome grill underneath and patriotic Cadillac fins at the back.  It was covered in many of the AECAFI board members and their families.  There was the Dumpster Diva, the Sweeper, and many more original characters on the float in crazy costumes having a great time.  They were off to go throw candy to the crowds lining the parade route and show everyone the super hero team!

After the parade, everyone headed over to Bart Webb Studios for live music, bar-b-que, and swimming pool fun!  The first show went from 1-7pm with six amazing local bands.  Master Chef, formerly of the James Joyce (RIP), had spent all night doing prep for the potato salad, baked beans, chicken kabobs, and home pressed hamburgers!  She then spent the day manning the grill and serving the masses while they enjoyed all of the amazing music.  As this was a children friendly event, the Avondale Estates Beach (a giant sand box with 3 foot deep 12 foot wide inflatable pool) was full of splishing, splashing and laughter by many of the local kids.  There was even a smaller kiddie pool for the babies!  After the bands played everyone went over to the Avondale Lake to catch the fireworks.  The fireworks were amazing and huge and looked beautiful over the lake.  The only down fall was that Sam (Bart's dog) was very unhappy with the fireworks and kept switching forth between barking and trying to hide in my skirt which was adorable but rather awkward.  Once the fireworks were over everyone came back over to Bart Webb Studios for the laid back after party.  The grill was fired up, The Good Golly Svengalis (the Imperial OPA Circus house band) played two sets.  Lively circus and eastern music with a flare of samba and soul.  There was some night swimming and additional fireworks to be seen from the pool.  Over all it was a pretty amazing day and I hope that all of you had an amazing 4th of July as well!