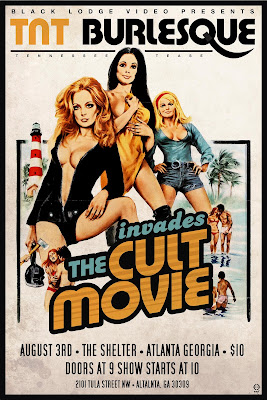 Back in March I was contacted by Tennessee Tease Burlesque from Memphis, who was trying to put together a tour for the very first time.  We went over dates and began trying to work out all the details.  Syrens of the South Productions was happy to get them a venue and a show date to help bring even more amazing burlesque to Atlanta! The reason I bring this up is March...for an August show...yup, you gotta plan that far in advance!

So on Wednesday, August 3rd, Atlanta was invaded by  Tennessee Tease Burlesque!  I was joined by Lola le Soliel with New Orleans Jon and his lovely date sitting near by at The Shelter.  Being a huge movie buff I was really excited about this show, I ended up being familiar with every movie they did thus proving that yes, I am a big dork.

The show was a tribute to their favorite cult movies.  It opened with the dinner scene from Beetlejuice

and just went to more awesome places from there.  Some of the highlights of the evening were tributes to Pink Floyd's The Wall

, which was done as a medley that took you on a tour of the entire movie with some amazing costume changes and layers, including the faceless mask.  There was also a hilarious rendition of What Ever Happen to Baby Jane

that went from a nearly literal rendition of the movie to a wire hanger spank fest!   There was an beautiful tribute to Metropolis

as well, and I may have been the only person in the audience that's seen that movie.  There was also the plastic wrapped body of Laura Palmer from Twin Peaks

/Fire Walk with Me

and a well done adaptation of Barbarella

with the dancing Valkyrie stripping as The Dude sung.  Dirty Dancing

had Baby and Johnny singing about her lover boy, and Grease

showed how helplessly devoted she was.  There was also some amazing fire acts including flaming nun-chucks for Enter the Dragon

and a beautiful fire dance for Nightmare Before Christmas.

tribute after intermission that had the sirens doing laundry and it was all sung acapella. The ladies went into the crowd and retrieved three gentlemen from the audience. It was really simple and subtle and that's what made it so great next to the flash and glitz of the other tributes.  The MC then came out to have the chosen gentleman twirl tassels or striptease for the audience in order to win an autographed show poster. Over all the show was amazingly well done, the acts were all very original and brilliant in both their execution and simplicity to make the easy to travel.  I highly recommend going to see Tennessee Tease Burlesque if you get the chance and do hope they'll come back to Atlanta again soon!
Posted by Unknown at 2:00 PM